Study in France- Along with being a favourite destination for tourists, France is highly sought after for its higher education. Home to some of the most famous writers and philosophers of the last century, France is also recognized for its science and management universities. Many international students study in France which is made possible by the addition of international courses in the English language. The most popular courses are in language, arts and humanities followed by sports sciences, economics, law and medicine. Changes to foreigner’s rights, policy of one-stop shops and the proliferation of study programs taught in English are some of the factors helping to make studying in France a top destination for international students. 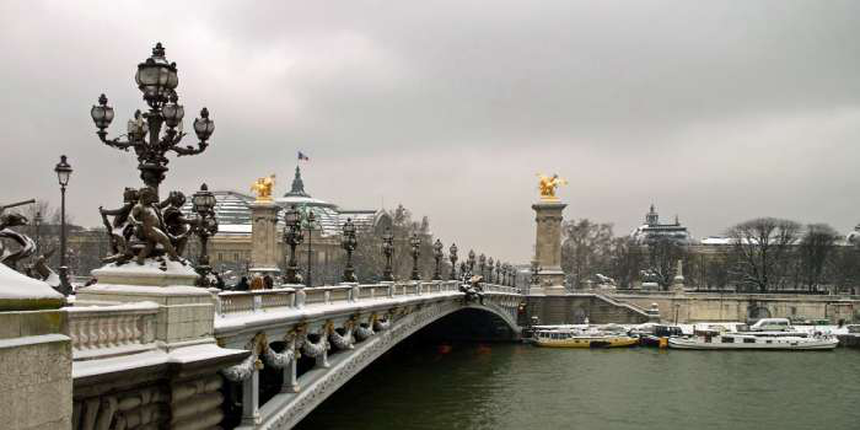 Moreover, a target of attracting 10,000 Indian students by 2020 to study in France has been set by the French government. An agreement between French Studialis and iNurture Education Solutions (higher education service provider will establish a centre of excellence in Bangalore that will create undergraduate and masters programmes for Indian students looking to study in France in subjects like tourism & hospitality, digital marketing and sports & luxury management.

France, which is officially called the French Republic, is a sovereign state in Western Europe. Its capital is Paris where students come to study in France from India and is the country’s commercial hub with the largest business district. It is home to Europe's third-largest number of cultural UNESCO World Heritage Sites and leads the world in tourism, receiving around 83 million foreign visitors annually. France performs well in international rankings of education, health care, life expectancy and human development which is why so many students choose to study in France. Due to globalization and France becoming an international hub, it is possible to study in France especially for management and masters courses which are offered in the English language. Studying in France is an attractive proposition as it is a country rich in culture and art history with one of the most well-preserved histories in Europe.

France, while being one of the most famous tourist destinations in the world, is also a prominent hub for Indian higher education aspirants. QS World University Ranking puts many universities of France amongst the best in the world. Université Pierre et Marie Curie (UPMC) and Ecole Normale Supérieure, Paris stay on top of all the major universities. Five of the top 100 student-friendly cities in the world are in France making it an attractive destination for international students looking to study in France. Paris has approximately 18 universities which cater to students from France as well as abroad. French universities also feature among the top global universities for a number of subjects, making France a top destination for students to study in France.

Top Universities by QS for studying in France

There are 83 universities to study in France, including the world’s first university, the Sorbonne in Paris which was established in the 13th Century. Many Indian students opt to study in France. The admission cycle for the September intake is:
March to April

An important reason to study in France is the affordable tuition fee since the fee of public universities is borne by the government. French study cost is not high as the tuition fees charged by French universities are affordable, with a nominal fee between €183 – €388. The study cost of the top five French institutions are:

Even though tuition fees of public universities is nominal, this does not include the living expenses and tuition fees of private institutes, Grand Ecoles and management courses. With over 150 scholarships, there are a lot of opportunities to get a scholarship to study in France. The Indo-French Consortium of Universities (IFCU) was created to offer dual master’s degrees or joint PhD research projects to students studying in France from India. Scholarship can be availed for joint degrees in nuclear technology, nano-technology and synthetic chemistry. French and Indian companies also offer co-financed scholarships to study in France. French firms such as Thales, Orange, DCNS, Alten, Michelin and Indian firms such as Neemrana group and Krishnakriti Foundation have offered scholarships to Indian students who want to study in France.

Due to the demand and a high number of applicants, it is advisable to apply for a France study visa almost 3 months before the start of the semester. While preparing for the Visa interview, applicants should be prepared to answer questions on their study project, research options, future plans, family background and motivations behind choosing France. After completion of the course, the country gives a six-month extension on the student visa to look for a job. France study visa cost is 50 euros.

In 2007, an initiative was launched by the French embassy to increase the number of Indian applications. Applicants need to make only one electronic application to study in France by applying to over 20 institutes of higher learning. Instead, it is the CampusFrance office in India that checks the accuracy of the files and validates the information for universities. International students of all nationalities residing in France for more than 3 months must obtain a student residency permit. Below are the steps that students need to take to study in France:

French education cost is low due to the universities being publicly funded. To cover the cost of living in private accommodation, a monthly revenue of €1,200 (minimum wage) is needed. Students in France have access to university halls of residence and restaurants. These lodgings receive state subsidies and the cost to students is reduced to €770. Students studying in France, regardless of nationality, also benefit from a state support for the living (estimated at 500 euros per month). Therefore, a minimum of €8,000 per year is required to live in France with student status. If the student wishes to have a place in the residence hall, it is important to specify the request as soon as possible because of the high demand.

It is important to note that France study cost is not the same for every region. Example – The cost of living is higher in Paris than any other French city (at least €130 more per month)

Schools provide assistance to their students in finding lodgings, especially in the inexpensive halls of residence. Below is a breakdown of France study cost:

All students enrolled, irrespective of nationality and the level of education, have the right to work during the course duration. Those with a France study visa can work up to 20 hours a week and as salaries are good, 600 euros a week can be earned while studying in France. International students are allowed to work for 964 hours each year and are not required to apply for temporary employment authorization or APT making it easier to study in France in English. This will help ease the burden of France study cost.

Top reasons to study in France