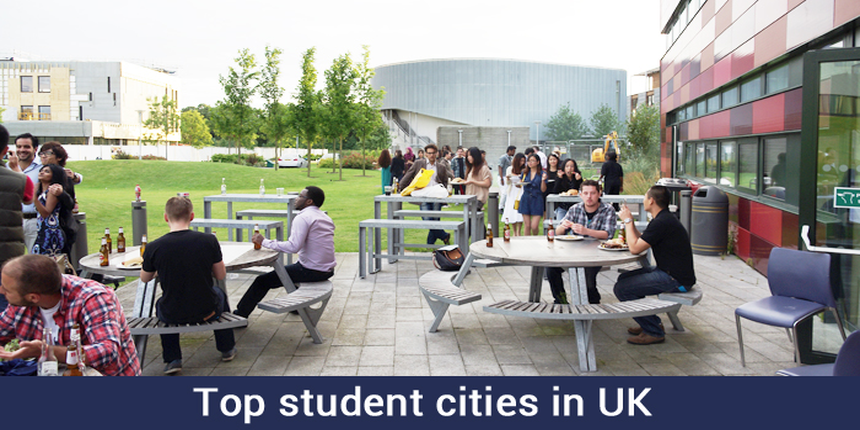 Top student cities in UK - Host to some of the oldest and top universities in the world, the United Kingdom is an attractive education destination for students from all across the world. According to the QS 2015-2016 ranking, 4 out of top 10 universities are based in UK in which universities like Cambridge and Imperial College London secure places every year. Besides being home to some of the grand universities of the world, the country is also a prominent study hub for students wishing to explore careers in Management, Law and Social Studies, among others.

Although the United Kingdom is a prominent education hub, studying in UK is an expensive affair. According to an HSBC report, cost of studying in UK is approximately USD 35,045 per year. Hence, it is difficult for international students to manage tuition fee along with the living cost which includes rent, transportation, food, grocery etc. especially for those who come from economically weaker sections. In fact, according to a Student Living Index 2015 report, students are spending more money on eating out.  In such a case, many students are also basing their study decisions on the city in which the universities are located. Of course, top student cities in UK with higher concentration of students and affordable yet comfortable living are attracting the most number of international students. The same is the case with UK, where cities like London, Manchester and Edinburgh are prominent among students mostly due the top universities located in these areas as well due to the cosmopolitan lifestyle.

Here is a list of top student cities in UK –

London is, unarguably, a city of highly potential and home to the top universities in the world with approximately 306,000 students. According to UK Visa and Immigration Department, students should have minimum budget of $1921.72 apart from tuition fee per month to study in London. Despite that London is one of the cost-effective cities in UK because of its cheap transportation and other affordable options for food, accommodation etc.

The home to the Scottish Parliament, Edinburgh is a prosperous city. It is also known as entertainment city in the UK. Percentage of crime in Edinburgh is 4 per 1000 populations which is why it tops the list of the safest cities in the UK. Total Student population in the city is 37,000.

Southampton is one of the greenest and second most affordable and top student cities in the UK. Apart from that, it is also known for its maritime heritage. Having plenty of luxury hotels and a city plaza, it provides plenty of part time job opportunities to students. To provide convenient transport service to approximately 30,000 students, Southampton has Uni-links bus service to the universities and free link bus service to connect to the prominent areas of the city.  It is just 78 miles away from London, capital of the United Kingdom.

Nottingham is the third most affordable and one of the top student cities in the UK. It is home to approximately 34,000 students in the UK. Nottingham has a thriving nightlife. Main attractions of the city are watersport, ice sport and national parks. The average of crime incidents are 31% in the city per 1000 population which makes this city among the safest cities in the UK.

Top 25 most affordable university cities in UK as per Times Higher Education ranking:

Stay tuned to www.studyabroad.careers360.com  for more news and updates on UK