Study medicine in Russia: One of the most affordable and popular destinations to study abroad for a medical degree, the Russian federation attracts a large number of international medical students every year, especially from Asian countries. According to the Indian Embassy in Moscow, 80% of Indian students studying in Russia are pursuing medical studies. 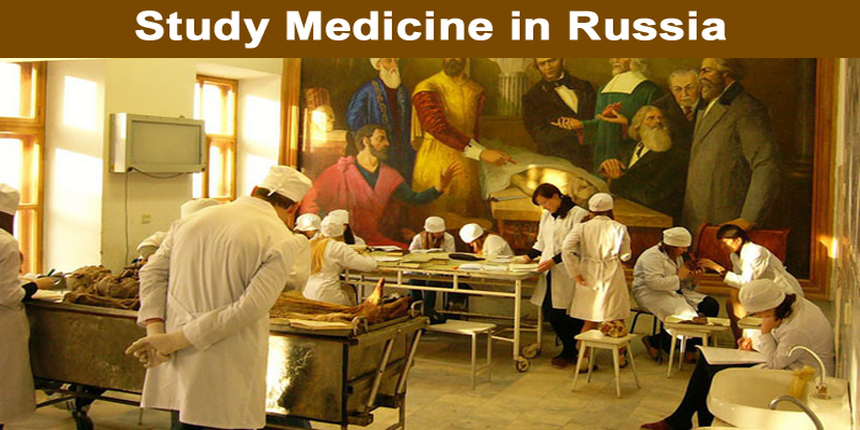 Compared to western countries, studying medicine in Russia is quite affordable for international students, thanks to the Russian government’s policy of subsidizing tuition fees for foreign nationals. Apart from this, what makes Russia a preferred destination for medical studies is the easy admission procedure which involves fast processing of paper works and no entrance test at majority of Russian universities.

In order to cope with an increasing number of medical students from foreign countries, many Russian universities offer medical programs in English as well. However, foreign students are advised to learn at least the basics of the Russian language as it would help them with their interaction with Russian nationals when they go to study medicine in Russia.

There are around 50 medical universities and colleges in Russia that operate under the aegis of the Ministry of Public Health of the Russian Federation, and the degrees offered by them are globally recognized by the WHO and the UNESCO.

Why study medicine in Russia?

Here are some major reasons why an international medical student should opt for a Russian degree:

Russian universities offer an MD (doctor of medicine) degree in general medicine, dental and sports medicine covering 6-7 years, depending on the language of instruction. Medical courses are offered in both English and Russian languages as per the student’s requirement. A medical course taught in the Russian medium takes 7 years to complete, which includes an initial one year language course for international students.

The Russian MD degree is considered equivalent to an MBBS degree in India by the Medical Council of India.

Eligibility for admission in Russian universities for medical studies

Tuition fees and living cost to study medicine in Russia

One of the greatest benefits of studying medicine in Russia is its affordable tuition fees. The Russian government reduces the tuition fees by 80-90% for foreign medical students, which means they have to pay 10-20% of the actual cost of medical education. According to Rus Education, an Indian student in Russia can complete his/her MD (MBBS in India) with the average tuition fees ranging between 800,000 rupees and 1.1 million rupees. Even, the living expenses in Russia are relatively less as compared to that in other developed countries. Living in Moscow costs an estimated US$ 200 per month to foreign students.

Documents required to be carried along to Russia

Question: What is the duration of the MBBS course in Russia?

The duration of the MBBS course in Russia is 5.8 years for students who are opting to take the course in the English medium. They will be exempted from the one year preparatory course before the start of the actual medical course.

Question: Does one have to get a minimum score in the NEET exam in order to study medicine in Russia?

No, there is no minimum score required in NEET but students will have to have a minimum score of 50% in physics, chemistry and biology in their 12th exam.

Question: What is the fee for medical courses in Russia?

The average fee for medical courses in Russia is INR 2 to 4 lakhs per annum.

Looking for studying in Russia? Read the article to get all in...

Yes, you can definitely take the U.S.M.L.E exam to practice medicine in U.S. The medical universities of Russia are well recognized all over the world. The Students are eligible for U.S.M.L.E exam after completing their studies from N.S.M.U.

To know what is U.S.M.L.E exam and its updates take a look in the below link.

All the Best for your future!!!

Can I give NEET again after doing 1 year mbbs in russia ?

So, with regard of you're query. After being accepted to an MBBS program abroad, you can sit for the NEET exam . No medical school outside of the country requires a NEET score card for admission, nor is it an eligibility requirement. It is only necessary when the institution issues a visa invitation letter because it is mandated by the MCI rules for the university.

There, they determine whether you are NEET qualified or not before issuing a letter inviting you to apply for a visa. You can still apply for admission even though NEET is postponed this year, just make sure you pass the test.

The only documentation needed for admission to an MBBS program abroad is your marksheets from grades 10 and 12.

If a student wishes to study MBBS abroad but did not pass the NEET exam, After receiving an MBBS degree from outside India, the student must sign a letter acknowledging that they are aware they will not be permitted to work there. Only then will the Embassy accept the invitation letter for a visa.

Hope this will helps you...!

Yes russian MBBS degree is 100% valid in Canada and it also recognised in Canada.

You can do mbbs degree either from Russia or India, both are good. It completely depends on your choice.

Getting a medical degree in India has much recognition and importance with world wide recognition and many of the Indian doctors who have done their medical education in India are doing efficiently in foreign lands.

Hi, hope you are doing well.

Yes, it is worth doing MBBS from Russia because Russia has top medical universities. The degree is also recognised by many bodies and accepted by MCI. The fee structure is low, ranging from 4 lakhs to 8 lakhs per year and the living cost is affordable. Russia provides scholarship opportunities to foreign students and opportunities to obtain dual diploma via joint programmes with foreign universities. You can easily study MBBS in English in Russia. The facilities and modern equipment provided to the students is highly advanced.

Russia is one of the best options to study MBBS by Indian students. It is a 6 years course.

For further information, please refer to this link:

GRE Guide - Know all about GRE

Most Affordable Universities in USA 2023

Accommodation in Germany for international students