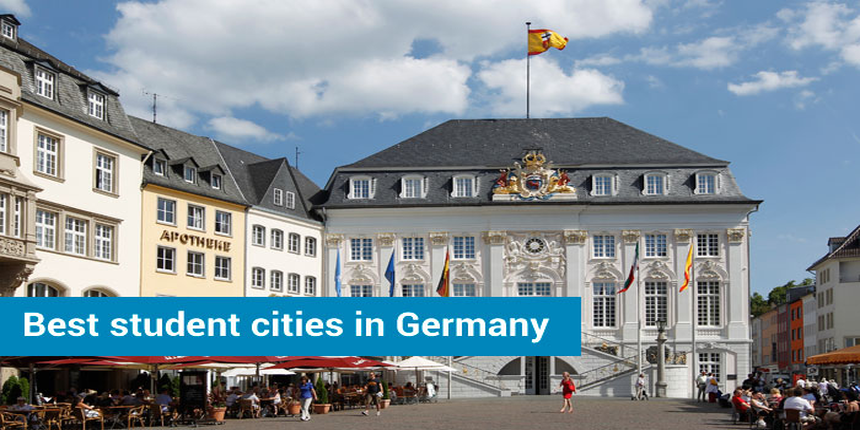 Best student cities in Germany: Home to more than two hundred thousand international students, Germany is  touted as one of the top 5 destinations for international students by UNESCO. The perks of studying in Germany are many, which is why it is also increasingly favored by Indian students as reflected by the explosion in the numbers heading to the country- According to DAAD, between 2008 and 2014 alone, the number of Indian students in Germany increased by 114%; a trend which is only likely to pick up steam.

One reason why Germany is emerging as a favorite destination is that public universities in Germany don’t charge any tuition fees, which automatically brings down cost of studying in Germany. Also, German degrees are internationally recognised, with many universities extending their instructions in English.

But students these days aren’t just satisfied with knowing that Germany is a great place for higher education, and want to get more information like which are the best student cities in Germany. Careers360 has compiled a list of top 5 student cities in Germany- cities that not only fulfill the academic criteria expected of a top academic destination, but also satisfy the human urge for safety, amusement and creativity.

Berlin: It shouldn’t come as a surprise that Berlin heads the list of best student cities in Germany, as it has been a permanent fixture in the QS Best Student Cities list for quite some time now. Placed 9th in the world and 1st in Germany in the list, the capital of Germany is steeped in history and has many poignant memories attached to it, especially from the period during the Second World War. Also, the city today is a thriving commercial hub and a cultural epicenter.

The cost of living in Berlin is another high point, as it scored the highest points in affordability ahead of cities like Munich and Hamburg (source QS). So whether you are living in off-campus or on-campus accommodation, or paying for groceries, your bill will mostly stay within limits, unless of course you go overboard.

As for academics, the city has three universities ranked by QS, with Freie UniversitÃ¤t Berlin top ranked at 119th place. Many universities in Berlin are offering more and more courses in English, especially in the graduate level, keeping in tune with the changing times, and it has helped it endear itself to the student community.

The second city on our list of best student cities in Germany is Munich, which is the third largest city in Germany. In the QS list, it jointly occupies the 11th position along with Zurich and immediately follows Berlin in the affordability test. The twin assets, affordability and tuition fee-less admission, is understandably a big draw among international students, including India, where students for a change can start thinking beyond loans and financial help. Helping matters is scholarship schemes like DAAD, which finances meritorious students who are eager to take up academic residence in Munich.

Munich is known as much for its opulence as it is for the traditionally ornate Bavarian architecture and cultural scene which will keep you hooked. Interestingly, the city happens to be the beer capital of the world and is dotted with fabulous parks and mountain ridges, which will invariably revive the nature lover in you.

So, if you feel burned out after putting long hours in your study and want to let off some steam, you will never be out of options when in Munich, easily one of the best student cities in Germany.

If you are a music buff, what better place to take up residence (during your studies that is) in the city where the musical genius Beethoven was born? Apart from being one of the oldest and best student cities in Germany, at one point Bonn had the distinction of being the seat of government alongside Berlin. The city in recent times, though, has also come to be known for its colorful carnivals and is a hub of international corporations.

On the academic front, Rheinische Friedrich-Wilhelms-UniversitÃ¤t Bonn, ranked 210th in the world and 12th in Germany, is a premier educational institute in the city and is a favorite among international students.

Home to the country’s busiest port, Hamburg is today recognized as an important media and industrial center and one of the best student cities in Germany. The unique architecture of the city, which is a marriage of ancient grace with modern flair, creates a lasting impression on impressionable minds, especially when you take into account that the history of the city goes back to the time of the Romans.

Another reason why students are drawn to the city is its thriving economy, which is evident in the number of big corporations and industries dotting the cityscape. As is the case, with economic well-being comes prosperity and peace, and there is this unmistakable sense of festivity in the air all year round; some of the famous festivals and events in the city include Filmfest Hamburg, and the fun fair, Hamburger DOM, to name a few. These festivals and events, along with giving lots of entertainment, help international students see the world with a new perspective and in the process help them to expand their horizons.

The city is no less academically inclined, as UniversitÃ¤t Hamburg isn’t just one of the top universities in Germany, but is also placed in the QS list, ranked 219th in the world.

If you are a cultural junkie, one of the best student cities in Germany, Stuttgart is a place where you wouldn’t run out of opportunities, for beginning from famous opera and philharmonic, to acclaimed ballet to world-famous museums, like the Mercedes Benz Museum, it has it all. Another endearing aspect about the city is it is greener than most other cities; this aspect is evident in the fact that it has the largest combined zoo and botanic garden, Wilhelma, in the whole of Europe.

For recreation, students can take trips to the nearby mountain ranges of the SchwÃ¤bische Alb and Black Forest. During winter, the region is abound with tourists looking to showcase their snowboarding and skiing skills, while in summer it is the hikers, getting a bit of adrenaline rush.

With a host of automobile industries and other corporations having their headquarters in the city, getting work in Stuttgart is a safe bet, especially for engineering students. The highest ranked academic institution in Stuttgart is UniversitÃ¤t Stuttgart, ranked 251st in the world, which more than ensures that you will not be found lacking in theoretical knowledge and practical skills when you go in search of work opportunities.

Fast facts about Stuttgart, one of the best student cities in Germany

Best student cities in the USA

Top student cities in the UK

Stay tuned to www.studyabroad.careers360.com for more news and updates on Germany