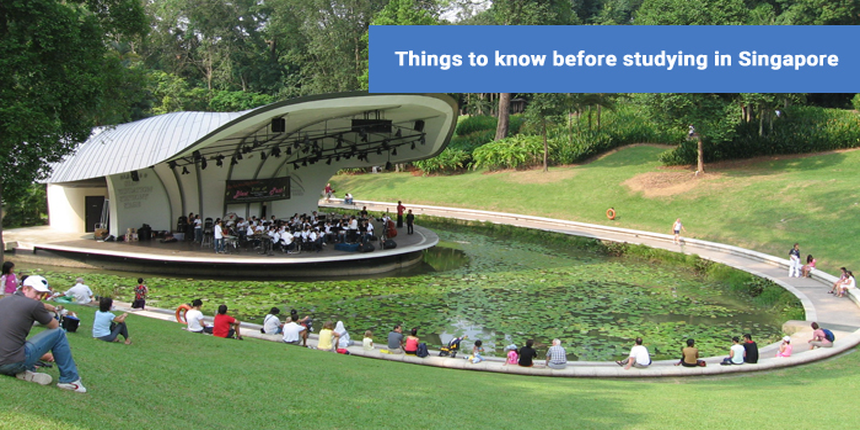 Things to know before studying in Singapore: Watching those futuristic Hollywood movies, do you also feel the urge to get transported to a future world where everything is so advanced, so meticulously planned and things move like clockwork? If you do, get ready to ride that dream. Because all you have to do is choose Singapore –which has all of those qualities and more –as your study-abroad destination. Now if you are wondering how does your desire for time travel and study abroad- two seemingly incompatible ideas -go hand in hand,  hold your breath; because Singapore along with being a futuristic city also has some of the best universities in the world.

The truth be told, students today are looking at a lot of different stuff before selecting an academic destination, and the presence of top universities is only one of them. It doesn’t always have to be related to academics, like when making a list for things to know before studying in Singapore, a student may focus on its cultural scene, food habits or places of tourist interest. Given this changing perspective, we have decided to make a list of things to know before studying in Singapore, encompassing both academic and non-academic arena.

Learn about the country: One proven way to is to read as much you can about that place, like its social etiquettes and the laws governing them. Here are some dos and don’ts when you are studying in Singapore that you need to follow to stay out of trouble.

Singapore is a poet’s muse: If you want a rendezvous with the future and the unexpected, better have a date with Singapore.  Skyscrapers that almost kiss the sky, metro stations that shout out for attention, parks that defy every convention, a case in point being the stunning Gardens by the Bay, it is a never ending parade of amazing creation that will put you in a trance you will pray it never ends. Also, despite having its fair share of concrete buildings, at no point it looks ugly, as a magical harmony exists among the many elements binding them together to create music that soothes the soul and feeds the intellect. And giving away how the world would look like in the future is the Marina Bay Sands Hotel, which features an astonishing 340m-long platform, known as the SkyPark, at the top of and connecting its three towers.

Get yourself an insurance cover: Universities in Singapore insist that you buy an insurance cover for the period of your study. National University of Singapore (NUS), for instance, has its own mandatory insurance plan, and students aren’t allowed to opt out, with the fee being included under the Mandatory Miscellaneous section. One reason for making insurance cover compulsory is medical costs is very high in Singapore and unless a student has insurance cover, he is going to face an uphill task making the financial arrangements. The insurance fee at NUS is S$89 per semester, inclusive of GST.

While insurance fee isn’t much, as compared to tuition fees, students are advised to include it when calculating cost of studying in Singapore, as it helps to keep your financial transactions under control.

Food habits: If you are foodie, you are going to have the time of your life while studying in Singapore, because the food scene is as colorful as it gets. To begin with, almost around every block you will find street food with flavors imported from China, India, Malaysia and Indonesia, creating an eclectic combination that would wake up the gourmet in you. While many are skeptical about street food, you needn’t worry because Singapore is easily one of the cleanest, most hygienic and sterile country in the world. Also, it is not only street food, as there are fine restaurants where you can bite into your favorite burger or specially flavored pizza.

Tamil is one of the four official languages of Singapore: It has to be one of important things to know before studying in Singapore, as now you are also going to be a part of the Indian diaspora. The official status, among other things, signifies that there is a sizable Indian population in the city, which you will find comforting in a foreign land. Learn a smattering of Tamil, if that is all you can manage, and chances are you will be welcomed with open arms by the largely Tamil Indian diaspora!

Apart from Tamil, the other official language is English, which means you aren’t likely to get into trouble like in countries like Germany and China, where English isn’t the lingua franca.

What are you going to do now that you know Singapore is the second costliest study-abroad destination? Sit idle and do nothing, or try to find a way to wriggle out of the financial difficulty. If you opt for the second option, you are not going to be disappointed as there are a number of scholarships options for international students studying in Singapore. Among the popular scholarships include the Singapore International Graduate Award (SINGA), which is sponsored by leading organizations and universities, including NUS and A*STAR.  The monthly stipend for the scholarship is S$2,000.

In addition to scholarships, students are also encouraged to pursue tuition grants, the Tuition Grant Scheme (TGS), while studying in Singapore. A unique scheme, it is supported by the Ministry of Education, Singapore, and offers subsidies to students enrolled in full-time diploma or undergraduate courses in a few select universities. Students in return have to sign a bond that they will stay back and work in the country for at least 3 years.

Ripe with places of tourist interest: Cross a street in Singapore, and it is likely you will stumble upon a tourist hotspot. It is because it isn’t your typical sleepy country, where you travel miles and days before arriving at a tourist hotspot. Instead you will find something to imbibe at every hundred yards, like in the form of the Orchard Road, the city’s bustling shopping destination frequented by shoppers of all hues and colors. Orchard features groundbreaking design and is outfitted with underground tunnels that make approaching and leaving the mall a breeze. Other popular tourist attractions include Chinatowns, which are kind of enclaves inhabited by the Chinese community. Filled with trendy shops, you can find shops selling souvenir Buddhas and tea sets, which can serve as pleasant reminders of your days and study in Singapore once you return home.

Stay tuned to www.studyabroad.careers360.com for more news and updates on Singapore

Study in Singapore- A hub for Ivy League universities. Singapore has become an attractive destina...

Quality education at a competitive price

Quality education at a competitive price - Many leading international universities have set up th...

What is the Working time of Neurosurgeons in Singapore and Hong Kong?

As Neurosurgeons are also doctors, so there is no any specific scheduled time for a doctor. Yes, there is maximum 8 hour schedule timing for every profession and even it applies for doctors. But being doctor is not just a profession but also an responsibility of service of saving life, So whenever duty calls, they need to attend the patient immediately.

Hope you get my point.

hi Im Indian citizen I want to study in Singapore but I had work permit of Singapore. Can I get student pass?

Yes you are eligible to get student pass only if you have admission notice from a university in Singapore. Working pass is not a big issue while apply to study there as most of the students who go there to study wishes to have one as it helps them to work and earn extra money because student pass only permits you to work only 16 hours in a week.

I want to study English Litreaure. Which college is best suited for it in Singapore?

These are the top Universities which provides English Literature Course.

View All Questions
Have a question related to Singapore ?
Never miss exam and college updates Login