Things to know before studying in Dubai 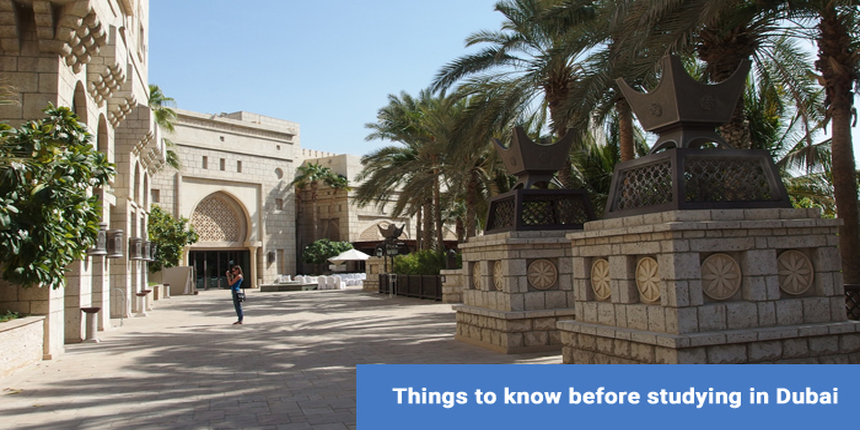 Things to know before studying in Dubai: While the UAE isn’t yet a top draw in the field of higher education like the USA or the UK, there are chances that it may soon reach there. All it needs to do is follow the lead of Dubai. The de facto entertainment capital of the world, Dubai today has a university that has broken into the QS ranking while four others are listed in the top 50 universities in the Gulf area. Then there are also a slew of foreign universities that have opened their branches in the city, which has all but revolutionized the education sector in the city. Also, being one of the fastest growing economies and home to some of the biggest companies in the world, it presents attractive work opportunities for international students.

That being said, Dubai is still an unknown city for many international students who want to know more about it before studying in Dubai. Knowing about one’s study-abroad destination properly not only helps one prepare better, but calms down the nerves by eliminating unwarranted apprehensions.

So, here we bring you the key things to know before studying in Dubai:

Learn about the moral code of conduct when in Dubai: To begin with, Dubai has very different sensibilities compared to other cities in the world, which has to do with UAE being a country which adheres to Sharia Law. And, familiarity with the different dos and don’ts of the prevailing laws in the country will help you stay out of harm’s way.

Dubai is cosmopolitan and fun: Reading the first point on our list, if you are getting a bit nervous, you need to calm down. Because, the population of Dubai is more cosmopolitan than anything you have ever seen, what with 85% of the total population made up of expatriates. Also, while Islam is the central theme around which everything revolves, people of other faiths are free to follow their own religion and even have their own houses of worship. The cosmopolitan nature of the city, meanwhile, gives you an international perspective and sets you free from parochial mindedness.

Another thing you will notice while studying in Dubai is despite being a meeting ground of so many different cultures, frictions are rare. What you instead get is people living in collective harmony brought closer by a common love for culinary delights, fashion, music and performance borrowed from around the world. One reason why Dubai is so peaceful has to do with there being so much to see and do in the city –sightseeing, going on desert safaris and diving and water sports – people rarely get time to invest in something as inconsequential as a confrontation!

Food habits: Dubai is home to around 180 nationalities and nothing reflects this cultural diversity than its food scene. The city is filled with restaurants, each significantly different than the other, and with representations from all across the world. The latest food craze sweeping the city is open kitchen fares and to some extent multi-cuisine eateries specializing in Japanese, Italian and Lebanese dishes. If you are studying in Dubai, there is another popular cuisine: the tapas-style meals, which is a combo of small dishes, the antithesis of the standard appetizer or starter. If money is a concern, go for the ubiquitous eateries –most likely managed by Indian or a Pakistani, or even Filipinos – dealing in plates full of curry, rice, or noodles.

If you needed an incentive to study in Dubai, you can get it in the form of a scholarship grant offered by universities. UOWD, for example, has scholarship schemes for both new and existing students, with the scholarship amount valued at 15% to 50% of tuition fee costs. Students at UOWD have the liberty to apply to as many scholarships they want, but they can’t be the recipient of more than one scholarship (or tuition grant) at any given time.

It is tourist’s dream destination: Dubai, which serenades the Arabian Gulf, isn’t just ripe with natural attractions, but there are enough man-made attractions to keep you busy the entire year. Surrounded by sand dunes, the city has its fair share of stunning beaches and warm waters and receives year-round sunshine, frequently making tourists go weak on their knees.  Among the man-made attractions, prominent ones include the Burj Khalifa, which doesn’t need any introduction, Dubai Aquarium & Underwater Zoo and Burj Al Arab, to name a few.  Perched atop an artificial island off Jumeirah Rd, Burj Al Arab is an iconic landmark that towers above the surrounding and commands immediate admiration. Studying in Dubai, you are going to get a lot of opportunity to rub shoulders with these acclaimed attractions.

Part-time jobs: If you are an international student studying in Dubai, there are both on-campus and off-campus work opportunities that you can explore. While you can seek off-campus work during summer, on-campus work opportunities are available throughout the year, with students taking up jobs at university campuses and colleges under the work during study in Dubai program. Being a fast growing economy and commercial epicenter, Dubai has managed to attract all the major business corporations to its soil, which in turn bodes well for students looking for work during study in Dubai, or for that matter work after study in Dubai.

Dubai being a commercial hub, with all the big corporations having their branches here, students should face little difficulty in part-time jobs. Also, upon completion of studies, one can easily find jobs in Dubai, as opportunities are unlimited.

Health insurance: A health insurance isn’t just a medical requirement when studying in Dubai, but it is needed to apply for the student visa as well, as without it no visa application will be entertained. Health insurance helps students avoid high medical care fees in Dubai. If you are sponsored by your university, you medical insurance bills will be included in the Student Visa Package fees, like in the case of Middlesex University Dubai. Or else, you can be sponsored by your family, but the formalities may vary from university to university, and so you need to the visit the visa office of the specific university for assistance.

Stay tuned to www.studyabroad.careers360.com for more news and updates on UAE

UAE Student Visa - Know all about the application process

UAE Student Visa – Candidates aspiring for study in Dubai can know the documents for student visa...

Study in UAE: Know all about best universities

Work after study in UAE

Showing 1 out of 1 Questions
3 Views

I am registering for MHT-CET. It asks for the location of my school and lists only Indian locations to select while my school is in Sharjah, United Arab Emirates. What should I do? In a PDF it says that international students are not required to write the exam but I want to write it.

You are not eligible to sit for this exam because first you are a foreigner and second this exam eligibility criteria says that the student must be an Indian National.

I hope you have got your answer.