Engineering in Australia: How much does it cost? 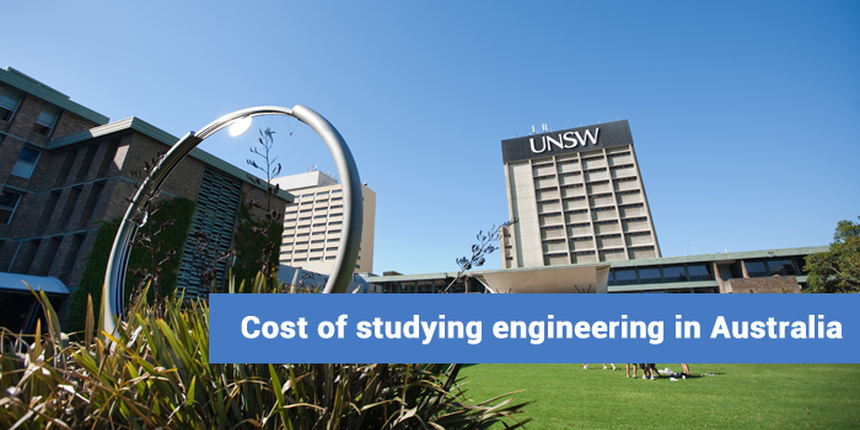 Engineering in Australia: With as many as seven of its universities listed in the QS top 100 universities in the world rankings, it comes as no real surprise that Australia is the third most popular academic destination after the USA and UK. In fact, the total number of QS listed universities in the Kangaroo nation stands at an impressive 33. What this large representation ensures is international students wouldn’t run out of universities offering universally recognized degrees, in whatever discipline they chose to study in Australia. It goes for engineering as well, if it is what is in your mind, with almost all the major engineering disciplines –chemical, electrical and electronics, and computer science and Information system not only well represented but ranked highly in the QS ranking (by subject). Just take look a chart given below to get an idea.

But if there is one aspect that may pinch students while studying in Australia it is the cost of studying in the country, as according to HSBC it is the costliest academic destination in the world. So, you need to be very smart with your money and, more importantly, know the various study-related expenses you might incur when studying in Australia. Having a good grasp of the estimated expenses would not only help you make arrangements for the necessary funds –whether through loans or self-funding, well in advance, but will ensure you don’t find yourself in a tight spot, when say you are asked to take an insurance policy, as you most likely would have factored that in.

Components to consider when calculating cost of studying engineering in Australia

It is also important to note here that when calculating cost of studying engineering in Australia, you need to consider a number of items, be it tuition fee, cost of living and exam-related expenses. Let’s tackle them one by one.

Whether you study in the UK or Canada, or some other country that may catch your fancy, the tuition fee more or less makes up the major chunk of overall expenses of pursuing a degree. And ditto in Australia, where tuition fee is the single biggest contributor. One notable aspect across the top universities in Australia is that tuition fee is almost uniform, with a barely a few thousand dollars differentiating one from the other; take for example University of New South Wales (UNSW), where undergraduate tuition fee is the highest at $40,360, but the other universities have tuition fee in the range $35,000-$38,000. What it implies is that you simply cannot rely on tuition fee as a yardstick for picking one university over another for your undergraduate program. The picture isn’t so different when we move to postgraduate studies, where the tuition fee again hovers between $34,000 and $39,000.

*All figures are in Australian dollars.

Use subject-wise ranking to pick universities

Since there isn’t much in tuition fee to differentiate between universities, both for undergraduate and postgraduate studies, students may refer to the subject wise ranking, which can be found in the first table above, to decide on a university. For example, if you want to get into Computer Science, University of Melbourne gets higher weightage than its peers since it is ranked 13th in the subject; by comparison, Australian National University (ANU), the next best option, is some distance adrift at 26th place.

While it is easy to find out the tuition fee of specific programs offered by a university, figuring out the living expenses isn’t so easy, as it is made up of many individual components, which can vary from city to city (like cost of groceries and accommodation). So, cost of living is more often than not gives you tentative expenses. Some of the items you will be spending your money on include groceries, accommodation, and transportation.

The average living costs in Australia according to the Australian Trade Commission (Austrade) are as follows:

In fact, the Department of Immigration and Border Protection has certain financial requirements that you must meet while applying for a student visa. These regulations, in addition to having provisions for you, also have financial requirements for those accompanying you in Australia, be it your wife or child.

Financial requirement for family members of students in Australia:

Health insurance is part and parcel of a study-abroad program and makes a healthy contribution to the overall cost of studying engineering in Australia. In Australia, international students need to be covered by the mandatory Overseas Student Health Cover (OSHC) for admission at Australian universities. OSHC covers expenses related to hospital visits, basic treatment, ambulance fees and limited medicines.

Students are at liberty to purchase health cover from any of the following providers:

Here is a cost sample from Allianz Global Assistance:

In addition to health insurance, you may also consider buying travel insurance, which isn’t mandatory for admission, but provides security against contingencies like ticket cancellation and medical emergencies, when you are travelling abroad. Generally universities provide some form of travel insurance free of cost, especially if it is related to your field of study, like Monash University extends complimentary travel insurance to students participating in a Monash Abroad approved program. But university provided travel insurance comes with limitations and doesn’t cover the entire gamut of exigencies related to your travel.

Before you board your flight to Australia to start your engineering course, there are expenses related to standardized exams that you have to bear. These include English language proficiency tests like TOEFL and IELTS. The cost for TOEFL test is between $170-$220, while IELTS costs around $170. These expenses all add up and contribute to the overall cost of studying engineering in Australia.

Stay tuned to www.studyabroad.careers360.com for more news and updates on engineering in Australia