Things to know before studying in Malaysia 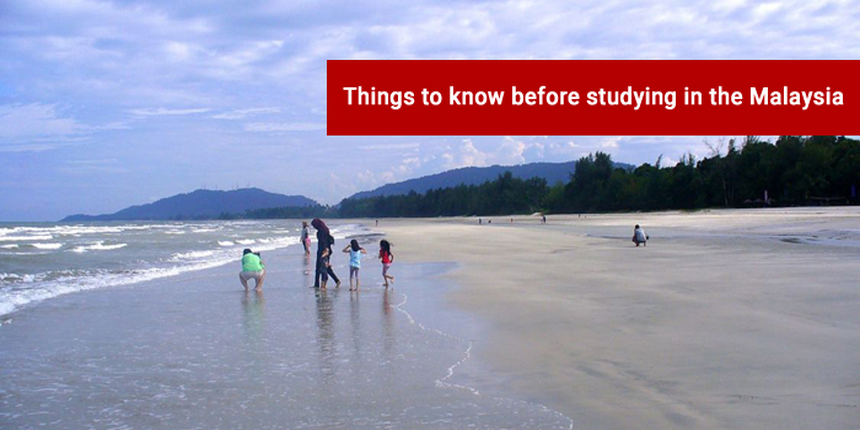 Things to know before studying in Malaysia:  The study-abroad landscape could be in for a dramatic makeover in the coming years what with the emergence of countries like Singapore and Malaysia as viable options. While nothing is set in stone, these Asian countries, buoyed by world-class infrastructure and strong support from their respective governments, today have a number of their universities listed in the QS best universities in the world ranking. If there is one thing holding back Malaysia, it is that it is bit of an unknown terrain for some students, who would ideally like to know more about the country before studying in Malaysia.

When we speak of things to know before studying in Malaysia, it could be anything from popular courses offered at top universities, the culture, popular sights to visit, work opportunities, to the food habits of the people. Remember, our desire to study in the USA, Australia, or for that  matter the UK not only breeds from the fact that they have top universities and great infrastructure, but also because we are familiar with so many facets of these countries, whether through Hollywood or the idiot box, where western movies and serials are the trending topics. So, here we try to demystify Malaysia so that you have one more option before you along with the traditional favorites (study-abroad destinations).

So here we bring you a list of things to know before studying in Malaysia:

Dos and don’ts in Malaysia: Unlike in the Gulf, despite being a Muslim-majority country, Malaysia is far more liberal and wears its multiculturalism as a badge of honor. Nevertheless, like any other country, it has its own set of dos and don’ts that you are expected to follow when studying in Malaysia. Also remember, Malaysia is sort of an idealistic society, with all the major communities, Hindus, Buddhists and Muslims participating in their religious and cultural activities with great enthusiasm. Here are some of dos and don’ts when studying in Malaysia:

Malaysia inspires you to treat your life as an adventure: If you wouldn’t mind mixing a little bit of fun to your life while pursuing your degree abroad, Malaysia is just about the ideal place. Because, along with the many stunning cities dotting the country, you will be welcomed by colonial architecture bearing stories of the country’s imperial past, rolling tea plantations that invariably draw comparison with tea plantations in Assam or Darjeeling, and stunning beaches that tell an intriguing tale every time you visit them. Then there are remote tribes, which will deepen your interest in history, while the mischievous orangutans in the wild jungles of Borneo would keep you guessing about what could be their next move. Studying in Malaysia you will get to see and experience all these and more, like how this culturally diverse country –it is home to about 50% Malay, 24% Chinese, and 7% Indian –manages to thrive.

Some of the other facilities you can look forward in an on-campus accommodation include:

Health Insurance: Like in all major study-abroad destinations, you need to have medical health insurance for the period of your study in Malaysia. Some of the treatments that need to be covered by the policy may include:

The minimum premium can be in the range of RM300.00 per year (source: Universiti Teknologi Malaysia). UTM also recommends that students only buy insurance policies from the insurance provider nominated by it. While medical care in Malaysia isn’t as costly as, say, it is in Australia or the USA, the point is with a medical insurance in hand you don’t have to worry about running helter-skelter in times of an emergency. Also, the last thing you would want is getting tangled in a financial mess in a foreign country, when your primary focus is getting a degree.

Scholarships: While the cost of studying in the USA and UK can be anything upwards of $30,000, its a paltry $9,000 in Malaysia. If that isn’t incentive enough, there are a host of scholarships available before students to study in Malaysia, which would bring down the cost further.  Some of the prominent scholarships include the Malaysian International Scholarship (MIS) initiated by the Malaysian Government and the Commonwealth Scholarship and Fellowship Plan (CSFP).

Some of the benefits of MIS scholarship include:

In addition to government scholarships, individual universities also extend a number of scholarships to attract brilliant minds from across the world. University of Malaya, for example, offers Graduate Research Assistantship Scheme.

Popular courses to study: While a country may be a top study-abroad destination, it isn’t necessary that it is the best place to study any subject. For example, Germany is suited for research-oriented courses and engineering, but if you would like to study MBA, France could be a better choice. Likewise, Malaysia also has its pet courses. Chemical Engineering, Business and Accountancy, Electrical and Electronic Engineering and Chemistry are some of the top courses to study in Malaysia, as each of these courses are listed in the QS list. While for chemical engineering, the best places to study in Malaysia are USAM and UM, you can study business accountancy at USM, which is ranked 89 for Management Studies, and UM (ranked 101-150).

Work opportunities: The concept “part-time job” is gaining ground among international students, which is a good thing considering that studying abroad, even in a country like Malaysia, where tuition fee and cost of living is relatively modest, is far costlier than their homecountry. You can work during study in Malaysia for a maximum of 20 hours per week, during:

Some of the popular places to work include restaurants, petrol kiosks, mini markets and hotels. However, international students are barred from working as a cashier, singer, musician, guest’s relations officer and masseur. Additionally, students shouldn’t involve themselves in any activity deemed immoral.

Food habits: The change in food habits is a major concern for students when studying abroad, with many finding it difficult to cope with the constant intake of foreign food. In fact, there is an assortment of choices available before you, starting from Indian, Chinese, Malay and Thai cuisines, which again reinforce the multicultural fabric of the country. And there is sea food too, with dishes like shrimp-laced sambal and coconut-steamed rice with peanuts and dried anchovies being the major highlights.

Stay tuned to www.studyabroad.careers360.com for more news and updates on Malaysia

Things to know before studying in USA

Things to know before studying in UK

Top courses to study in Malaysia

Top Courses for Masters in Malaysia

Work after study in Malaysia

Study in Malaysia: Know all about best universities

Showing 1 out of 1 Questions
23 Views

My kid is doing A levels in Malaysia with Biology Chemistry & Maths only. No Physics. Is she eligible to apply for NEET 2020. It is compulsory to attempt NEET exam to get eligibility cert. to do MBBS from abroad. Is physics needed... as UK accepts Maths OR Physics for MBBS admission.

Dear Sandeep, you haven't mentioned your kid's Nationality. If your kid has Indian Citizenship but is in Malaysia only to study but plans on appearing for NEET as an Indian National, then yes NEET is mandatory either to study in India or abroad. For beibg eligible for NEET, he/she should have completed 10+2 or equivalent with Biology, Chemistry and Physics as his/her core subjects. Physics is a mandatory exam for NEET. There cannot be any exception to that whether the country your kid chooses to study needs Physics or Mathematics. Physics, Chemistry and Biology are the mandatory subjects to appear for NEET. This rule applies to NRIs, OCI, and PIOs who want to study MBBS in India. But if your kid is a NRI/OCI/PIO then he/she doesn't need NEET to study in another country.

View All Questions
Have a question related to Malaysia ?
Never miss exam and college updates Login