Things to know before studying in Australia 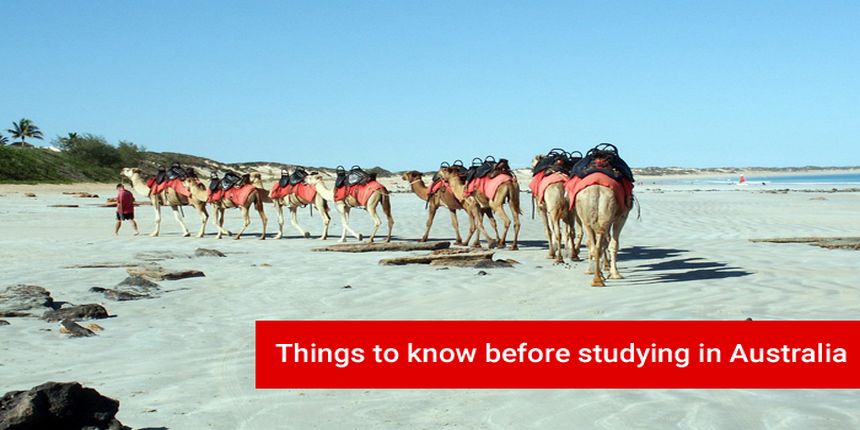 Things to know before studying in Australia:  The exploits of the Australian cricket team and their uncompromising ways is appreciated across the world. But look a little closer and you will find that Australia’s exploits go far beyond the cricket field and encompasses a whole gamut of sporting activities. Not only sports, brand Australia today has instant name recognition in the academic sphere as well, as it finds itself locked in a three-way battle for the title of the top academic destination in the world with the UK and USA, who are the current leaders. Students studying in Australia today can pick from its 33 universities that feature in QS international ranking.

Given Australia’s vaunted academic position, making a case for Australia for your study-abroad program won’t be that difficult. But still there are certain things to know before studying in Australia. Like, there will be occasions when you will be free from your college duties due to semester breaks or holidays, and finding a part-time job would help you earn some valuable dollars; remember, for all the good things, it also is the most-expensive study-abroad destination in the world!

Just in case you need some more suggestions, we have an entire list of things to know before studying in Australia readied for you:

Learn about the country: The best way to beat homesickness and adapt to a new environment is to learn about it as much as you can. So, if you are selected for a university in Melbourne, say for example, read up all the important information about the city, like its prominent tourist destinations, eating points and culture. Getting familiar with your new home and the new culture will not only make you feel more independent, but buffer you from the cultural shock that students feel immediately upon their arrival. Speaking about culture, you don’t have to read piles of books or every facet of it, but only those sensitive trigger points. The thumb rule is stay away from controversial topics and making political comments.  Instead focus on qualities that would endear you to the locals.

Australia is vast: Long, never-ending coastlines, deep-blue sea, sea creatures that seem right out of a fairy tale, deserts that are good enough to slit the human spirit, and vast, dense jungles teeming with wildlife, Australia conjures up images like none other. So don’t be surprised if you come across a student who picked Australia for reasons other than academic ones. Who knows he may be a naturalist at heart and may lead the next wave of revolution to save planet earth, which may not be a bad idea after all!

But if you are planning to see Australia in all its glory and everything it has to offer, hold your horses, because Australia isn’t some European country that you can crisscross in a few days. To explore Australia, which happens to be the sixth-largest country in the world, you will not just need a lot of time, but a lot of money. There is no reason to despair though, as almost every city in the country is littered with amazing things, not to speak of the incredible scenery wherever you go and the adorable countryside.

Part-time jobs: Among the things to know before studying in Australia, the financial aspect of studying in Australia corners the maximum attention. And there is a good reason for it: Australia is the most expensive study-abroad destination in the world. Now unless you find yourself a part-time job, the financial burden may be too much to bear. While part-time earning won’t off-set the tuition fees, it though will help students pay off some portion of the living expenses. Normally, when studying in Australia, you are allowed to work part-time for up to 20 hours per week when academic session is on, while during any scheduled course break, you can work for unrestricted hours.

But before you start work, make sure that your student visa allows you to work during study in Australia, because otherwise your visa may be cancelled. What is interesting is even family members of students are allowed to work under the student visa scheme. So, if you are accompanied by your wife/husband, they can work as well. The only difference being, unlike students, family members are bound by the 20-hours-work limit even during holidays.

Buy a health insurance: If you are planning to study in Australia, you would most probably need a health insurance, as most universities mandate it for admission. The underlying idea behind having a health insurance is to protect the student studying in Australia from having to pay huge medical bills, which is found to discourage students from availing medical intervention in times of emergency. While universities have their own preferred insurance plans, students are free to go for a plan of their choice, with the only condition being the plan should provide comparable coverage to the university plan. Also, since studying abroad entails lot of travelling, having travel insurance isn’t a bad idea.

Learn the rules of the road: Australian citizens abide by the rules of the road almost unfailingly, which you would find to be a big relief. After all, at some point, you may find yourself behind the wheel of a car, probably a rented one. Also, it is advisable to avoid driving at dusk and dawn, because the dimming light may make it difficult to see an approaching kangaroo or some other animal and there may be an unfortunate incident. Follow this piece of advice, and your stay and study in Australia would be less contentious but more memorable!

Food habits: Australians have very diverse food habits, thanks to its cosmopolitan cities. If you stay at on-campus accommodation, you have less to worry, though, as the diet is more in sync with what you eat at home, as universities make it a point to make it easier on international students. However, if you stay at off-campus accommodation, check with the landlord and speak to him about your food habits.

Stay tuned to www.studyabroad.careers360.com for more news and updates on Australia

You can get study visa for the course based on your marks, IELTS score, and other criteria set by Australia. You must first select the course you want to study later you will have to take IELTS course, you must apply prior to 6months from course commencement. You must have enough balance in your bank to fund your education, and expenses, you must have the whole amount before 6 months. Later applying for the course you must apply for education visa from Australian authority. It will take time, and it depends upon your luck and your documents ,visa will be provided then.
Read More
Answer
Answer Later
Report
4 Views

You might get admission in colleges in Australia on the basis of your class 12th as you have passed it. You can try for the graduation degree but for which so ever  University you are going to apply kindly check the eligibility criteria so that it doesn't trouble you in later stage . As every University have their own eligibility criteria.

how to B-tech Addmision in Australia

Founded in 1861, University of Melbourne has come a long way with 15 students in the beginning to a network of nearly 16,000 alumni. There are about 4,900 international students pursuing engineering in the university. According to QS, the University of Melbourne tops the chart of best engineering colleges in Australia, and stands in the 18 th position among the world's top universities. The university offers various engineering programmes like Chemical and Biochemical Engineering, Computer & Information Systems, Biomedical Engineering, among others.

Aspirants applying to the university will also have access to its various research centres like the Advanced Centre for Automotive Research and Testing (ACART), Centre for Neural Engineering and Melbourne Energy Institute, to name a few.

For admission at the University of Melbourne, you will need to follow these steps:

If required, aspirants will have to submit reference letters and a statement of purpose. The number of letters may vary according to the programme. Students will have to take English proficiency tests like IELTS or TOFEL with a score of 6.5 and 79 plus, respectively.

Applicants, generally, open around August and September and the tentative closing dates are around October and March.

Engineering studies in Australia is incomplete without the mention of University of New South Wales(UNSW) that ranks number 21 among the top engineering colleges in the world. But its reputation as a quality engineering college doesn't just end there. According to QS, five engineering specialisations of UNSW -- civil, mechanical, chemical, electrical and computer science -- rank among the top 40 faculties in the world in their respective disciplines. What further boosts the university's image as a provider of  international education is its student exchange programmes, which is spread across 145 universities in 26 countries.

To apply in one of the top engineering colleges in Australia, aspirants will have to submit their academic transcripts along with other supplemental documents like test scores of IELTS or TOEFL. In IELTS and TOEFL, one must score minimum 6.5 in and 90 IBT, respectively. However, the scores many vary as per the programmes. Apart from test scores, applicants will have to submit letters of recommendation and a statement of purpose .

Admissions start in February and July. It is recommended that you apply at least 4 months before the new semester starts and so that you can have plenty of time to take care of the student visa and funding process.

Visit the link below for full details:

Hi I have an education Gap but i will be completing my graduation in BJMC in 2020 june. Looking forward to pursue masters from Australia in communication. Have 5 years wrking experience in MNC. Please suggest the way forward.

Australia is quite expensive and living expense is huge so you must have huge amounts of money before applying to universities. However, some universitites give scholarships but it does not cover all expenses.

Note : If the transcripts and other relevant documents are not in English, they must be translated into English