GRE Scores for Top US Universities 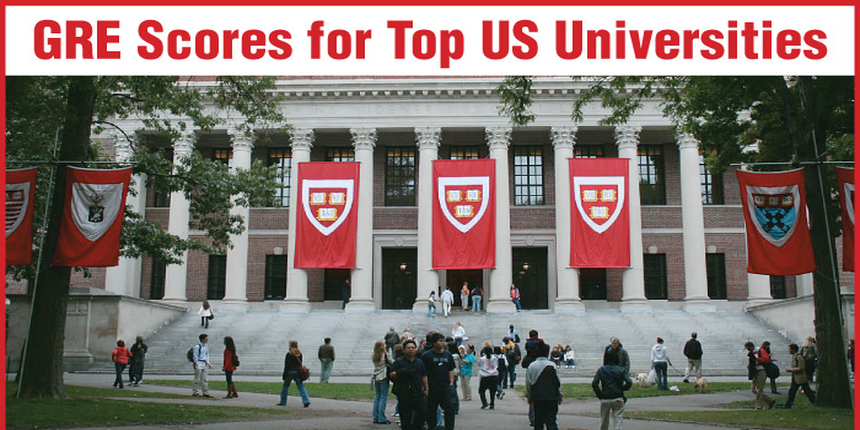 GRE Scores for Top US Universities -
GRE score is inarguably one of the most important elements for graduate level admission in the US universities.If the candidate is eyeing some of the best universities in the USA, it is imperative that he is aware of the complete admission procedure, including the GRE scores required by the universities. One thing to keep in mind is that the required GRE score varies within departments of the same university.

For example, the University of California, Berkeley, requires GRE 2017 score within the range of 154-159 for MS in Physics, but there is a requirement of massive 167 GRE score in English. Same is the case with other universities as well.

While a majority of the universities and departments accept GRE score, this, however, is not the sole criteria for admission. The universities admit students depending on their intake capacity.

Before we discuss the required GRE Scores for Top US Universities, let us first take a look at the GRE pattern.

The GRE General Test measures an aspirant's verbal, quantitative, critical thinking and analytical writing skills which are covered in three sections â Verbal Reasoning, Quantitative Reasoning and Analytical Writing. GRE is scored on a scale of 130-170.

Here, we will discuss the average or minimum GRE score required by Top US Universities across four subjects - Computer Science, English, Economics and Physics. The GRE scores mentioned here pertain to the Verbal and Quantitative sections. It reflects that the candidate has to get a minimum required score between the mentioned relatives in both the sections. For example, if the candidate's score against a subject is 165-170, it means, he needs to score between 165-170 in both the sections.

Want to know which universities do not require GRE score, check here

GRE Scores for Top US Universities:

Ranked among the top universities in the world, Harvard is the oldest institution of higher education in the United States. The university has more than 100 research centres and has 12 degree-granting schools in addition to the Radcliffe Institute for Advanced Study. The university offers over 8,000 courses. The best part about Harvard is that international students receive exactly the same financial aid as Americans.

As reflected in the table below, Harvard demands very high scores in GRE across all fields. Most of the departments require above 95 percentile or 165 points on the scale.

Founded in 1885, Stanford is recognized as one of the world’s leading research and teaching institutions. The seven schools of Stanford -  Business, Earth Sciences, Education, Engineering, Humanities and Sciences, Law and Medicine -- offer over 15 degrees. Stanford, too, follows a high standard when it comes to accepting GRE scores.

One of the most popular Ivy League institutes in the United States, there are three schools within the Princeton campus - School of Architecture, School of Engineering and Applied Science and Woodrow Wilson School of Public and International Affairs. The University also has 34 departments offering both undergraduate and graduate degrees.

Established by the Commonwealth of Massachusetts on April 10, 1861, MIT has five schools offering over 30 courses. The schools include School of Architecture and Planning, School of Engineering, School of Humanities, Arts and Social Sciences, MIT Sloan School of Management and School of Science.

Famous for the identification of vitamin E and many such pioneering researches, the University of California, Berkeley, has been ranked among the top ten universities in the world by almost all the reputed ranking agencies. Constituting 14 colleges and schools, the university offers around 350 degree programs.

Yale University is the third oldest institution of higher education in the United States and has three major academic components - Yale College for pursuing undergraduate program, the Graduate School of Arts and Sciences, and the professional schools.  Founded in 1701, the university has around 15 schools, and offers about 145 programs.

The University of California, Los Angeles (UCLA), is a private research university which offers over 335 undergraduate and graduate degree programs in a wide range of disciplines. It offers 150 graduate programmes which includes both management and health sciences subjects.

Established in 1754, Columbia is the fifth oldest institution in the USA. Columbia University has 21 schools, which include the Columbia School of Journalism- the administrator of the famous Pulitzer prize. The 96 departments of the university offer courses in over 1,000 courses.

Stay tuned to studyabroad.careers360.com for more news and feature related to GRE Scores