Why Liberal Arts: Hiram E. Chodosh talks on the importance of Liberal Arts as an academic discipline 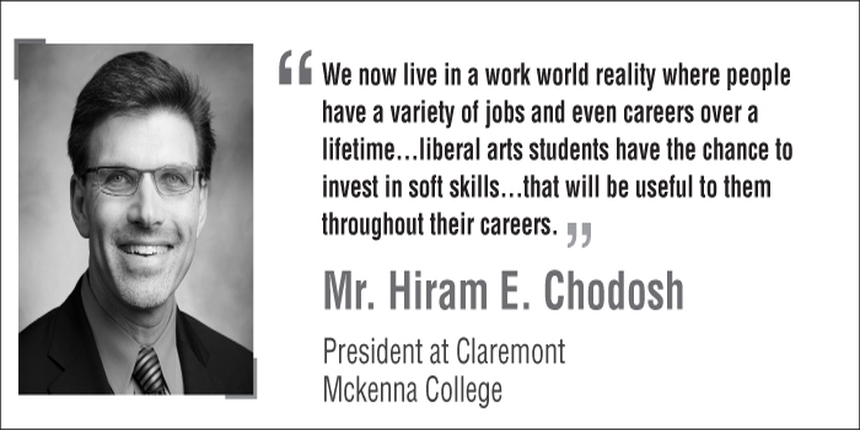 As the economy becomes more and more challenging, the importance of non-academic aspects as recruitment criteria has increased. Apart from academics and theoretical qualifications, the employer today places much more importance on the soft skills of students like leadership qualities, pragmatic orientation, communication skills, ability to think critically, innovativeness, problem solving dexterity etc. As a result, the relevance as well as significance of Liberal Arts as an academic discipline has risen.

Mr. Hiram E. Chodosh, recipient of Gandhi Peace Award 2011 and President at Claremont Mckenna College, USA, talks on Why Liberal Arts; Liberal Arts as an academic discipline, and the reason for its growing importance.

The term “Liberal Arts” has multiple definitions. How would you describe it?

Liberal arts education in America has a long tradition that can be traced back to classical Greek notions of the skills (arts) that an educated person needed to acquire regardless of what occupation they intended to pursue.  They included effective communication in speaking and writing, logic, arithmetic, geometry, music and astronomy.  Over the centuries, this fundamental notion of education has evolved into today’s liberal arts education.  That is, a broad-based education that prepares one for the many challenges of a lifetime of employment, good citizenship, and a changing environment.  It is not an education that is driven by developing a specific skill that may well become obsolete in a few years.

For instance, at Claremont McKenna College (CMC), the traditional liberal arts are combined with an appreciation for the practical application of broad-based education to provide our graduates with knowledge and skills to empower them to occupy positions of leadership in industry and society. The curricular structure of a CMC education provides a rich liberal arts foundation upon which to develop leadership and pragmatic, career-oriented skills. This development is facilitated by co-curricular experiences including internships, research experiences, etc.

Liberal Arts students are broadly educated and graduate with intellectual and practical skills that can be employed in a range of professions.

What are the scope and opportunities of Liberal Arts as an academic area?

A recent (2013) national survey of business and non-profit leaders by the Association of American Colleges and Universities (AAC&U) found that 92% of all employers surveyed say that “innovation is essential” to their companies’ and organizations’ continued success. Nearly all of those surveyed (93%) said that “a demonstrated capacity to think critically, communicate clearly, and solve complex problems is more important than a candidate’s undergraduate major.” These broad crosscutting capacities are the traits of a liberal arts training.

More than 9 in 10 of those employers surveyed say that it is important that those they hire demonstrate ethical judgment and integrity; intercultural skills; and the capacity for continued new learning. These are all characteristics of a liberal arts education. According to the AAC&U study, employers clearly endorse educational training and practices that involve students in active and effortful work. These practices include collaborative problem-solving, internships, senior projects, and community engagements.

What are the career prospects of a student pursuing Liberal Arts?

A liberal arts education is an inherent advantage and graduates emerge with a set of “soft skills” such as critical thinking abilities and adaptability to change. Employers often note that these “soft skills” are the ones that help a person move up the ladder at a company or organization. We now live in a work world reality where people have a variety of jobs and even careers over a lifetime. For example, many graduates in more practical and specialized fields may find their skills outdated within five to 10 years, but liberal arts students have the chance to invest in soft skills such as writing that will be useful to them throughout their careers.

Many innovators in America have been influenced by the liberal arts. One good example is Steve Jobs, the late founder of Apple. He was neither a computer programmer nor a hardware engineer and is famous for having told graduates at Stanford University that one of the most lasting experiences of his life was studying calligraphy while at Reed College.

“It was beautiful, historical, artistically subtle in a way that science can’t capture, and I found it fascinating,” Jobs said. “None of this had even a hope of any practical application in my life.” It all came back to him when he was designing the first Mac computer. His knowledge of serif and san serif typefaces was helpful. As Jobs later said, “personal computers might not have the wonderful typography that they do.”

Jobs also dropped out from Reed and spent seven months trekking across India on a personal spiritual journey. Walter Isaacson, his biographer, reported what Jobs said when he returned from India: “The main thing I’ve learned is intuition, that the people in India are not just pure rational thinkers, that the great spiritual ones also have intuition.”

What are the specific skills and educational aspects that a Liberal Arts course offers?

Here I will quote directly from our academic catalogue: “The learning goals at CMC are to teach students transferable abilities including analytic skills, communication skills and critical thinking skills, and to impart intellectual breadth and preparation for responsible leadership and citizenship through exposure to a variety of academic disciplines. Within the broader context of the College’s unique mission, each major discipline at CMC has set its own learning goals including substantial knowledge of the chosen field of student with identified student learning outcomes for assessment and evaluation.”

To determine that our graduates are achieving the level of competence we set for them, we measure their performance on a series of indices that reflect the learning goals we set for them.  Each year a faculty committee evaluates a sample of senior theses (fourth year independent research projects) and assesses the level of competence exhibited by the students in terms of the following goals: 1) Inquiry and Analysis (the collection of evidence and determination of its utility for making informed judgments) 2) Problem Solving (defining problems, evaluating potential solutions, evaluating outcomes) 3) Critical Thinking ( comprehensive exploration of issues and events prior to accepting a conclusion or opinion).

Faculty also evaluates the quality of student’s written work including syntax, sources, and content.  Faculty also attends a number of classroom oral presentations to evaluate the quality of purposeful presentations designed to increase knowledge and promote change or new awareness in the listeners’ values or attitudes.  Finally, faculty evaluates student’s level of skill with information technology.

Additionally, each academic program at the College has established a set of learning outcomes for its graduates that demonstrate mastery of the basic skills associated with the discipline.

By combining all of these indices of student learning along with student grades in individual classes, we can be certain that our graduates are leaving the College with the tools of an educated person able to find their way in a challenging global environment.

What is the general pedagogy involved in a Liberal Arts course?

It’s important to know that the essence of a liberal arts education is that the focus is on the student and the curriculum reflects that emphasis. The student is involved in his or her own education. These are active learners who work closely with faculty. Learning is collaborative rather than competitive. Values are central to the liberal arts endeavour. The liberal arts produce a synergy and the whole becomes greater than the sum of its parts.

What are the various education levels that are offered in USA in the academic area of Liberal Arts? Which are the top institutions in USA offering liberal arts studies?

Many top institutions offer liberal arts education; however, the finest liberal arts education is offered by liberal arts colleges. [Include reference to Carnegie classifications]  Among those, CMC is in the very top group, along with the other four undergraduate Claremont Colleges, Pomona, Harvey Mudd, Scripps, and Pitzer. Obviously, it is hard to determine the “top” institutions, and many competing ranking systems attempt to do that.

What are the different requirements, whether academic, soft skills related or extra-curricular, to get admission into a good institution in USA in a Liberal Arts course?

At CMC, the Admission Committee tries to consider the whole person while reviewing an application. There is no formula. An applicant’s high school record is the most important aspect of your application, but very strong consideration is also given to extracurricular activities, essays, letters of recommendation and standardized test scores. Competitive candidates for admission pursue the most demanding course work possible and receive strong grades. The following are the minimum secondary school requirements:

Why should students choose USA as their preferred destination for studying Liberal Arts?

The main reason to choose the U.S. as a preferred destination is that the world’s best liberal arts institutions are based here. Whether an Indian student chooses CMC or any of the other many excellent liberal arts colleges, they can be assured of a world-class education that will prepare them for the challenges of the 21st century and authentic engagement in the world and the evolving workplace.