US Degrees - Academic pathways in UG, Masters and PhD 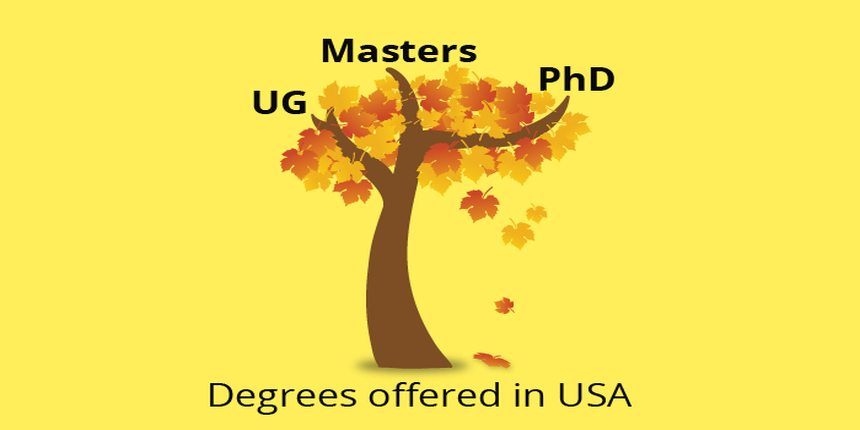 US Degrees: With as many as 75% of the top 20 universities in the world gracing its academic landscape, the US is understandably the pre-eminent center of academic excellence of the world. But what are the typical US degrees, and how are they different, if any, from those offered by their Indian counterparts. These are questions that often trouble students aspiring to fly to American shores for higher studies. It is a genuine concern, because unless you know the technicalities, you may end up enrolling into a wrong program, which won’t be only a monetary disaster, but cause enough mental agony as well. Also, since US degrees are renowned for their flexible academic model, many universities even allow students to select their preferred combination of subjects – it is only logical that the more homework you do before admission day beckons, the better placed you are.

On many occasions, US degrees differ only in their nomenclature, but at other times there are subtle and even major differences. So, you need to have at least the basic idea about the US degrees so that you can choose a program accordingly. Here we bring you some of the usual degrees making up the undergraduate and graduate programs, along with a few uncommon ones.

Undergraduate Degrees in US:

Bachelor of Science in Engineering: The undergraduate academic degree awarded to engineering students in the US is commonly called Bachelor of Science in Engineering (BSE).  The degree is awarded after successful completion of four years of engineering study. The BSE degree is equivalent to a BTech or BE degree offered by Indian universities and colleges and is amongst the most popular US degrees among undergraduates.

Bachelor of Law: While we in India are familiar with the term Bachelor of Law (LLB), not many of us know that the same degree goes by the name of Juris doctors (JD) in the US.You need to complete three years of legal education to earn the JD degree, which also happens to be the first professional law degree awarded in the USA. This particular US degree can be earned from law schools, both approved and unapproved by the American Bar Association (ABA).

Bachelor of Science: The basic difference between Indian education system and the US education system is that while most Indian degrees in the undergraduate level–especially those covering science and arts disciplines– are of three-year duration, the typical course length in the US is four years. Also, science graduates in the US are generally awarded Bachelor of Science (BS) degrees, equivalent to BSc degrees under the Indian system.

Bachelor of Arts: Like a BS degree, the Bachelor Arts (BA) degree in the US also takes four years to complete. After graduation, students are awarded BA or AB (Artium Baccalaureus) degrees.

In most US universities, SAT or ACT test scores are mandatory for admission into undergraduate courses, especially as a freshman.

Postgraduate Degrees in US:

Master of Law: The LL.M. (Master of Laws) degree in the United States, like in India, is a one-year program. As part of the eligibility criteria for admission into an LL.M. program in the US, applicants need to either have a J.D. (Juris Doctor) from an accredited U.S. law school or a first law degree (J.D., LL.B. or the equivalent) from any foreign law school.

Master of Arts: After competition of a Master’s program in the arts, students earn an AM or MA (Master of Arts) degree. The program duration in the US is usually two years, but there is no dearth of one-year programs as well, like the AM program in Medical Anthropology offered by Harvard University, which can be completed in 12 months.

Doctor of Medicine: The first medical degree in the US is the MD (Doctor of Medicine) degree, which is normally open to undergraduates with any majors, preferably science. Since MD programs admit graduate students, it is different from an MBBS (Bachelor of Medicine and Bachelor of Surgery) degree offered in the Indian system with the latter being open to undergraduate students. Consequently, MBBS is an undergraduate degree, while MD is mostly a postgraduate degree. The duration of the MD program is four years, with students needing to clear the standardized MCAT for admission into a medical school in the States.

Master of Business Administration: Business Schools in the US offer both one-year and two-year Master of Administration (MBA) programs. Kellogg School of Management at Northwestern University is one prominent example that offers students the flexibility of choosing between the two programs. Each has its own advantage, like the one-year program is the fastest path to an MBA degree, but at the same time it is rigorous and intensive. The two-year program, meanwhile, allows students more time in their hands to hone their management skills. GMAT and GRE test scores are required for admission into almost all major B-schools in the US. It remains one of the most sought-after US degrees.

Doctorate Degrees in US

The PhD (Doctor of Philosophy) degree is the highest postgraduate degree offered by universities across the world, and is one of the most popular degrees in US among international students. The degree, which helps students prepare for a career in research, advanced development or teaching, is normally pursued after completion of a Master’s program. The duration of the program in the US can extend from three to five years. The degree is awarded in almost all the major disciplines. Some of the admission requirements to get into a PhD program in the USA may include:

However, there are also universities which instead of GMAT and GRE scores may ask you to submit documents charting previous work that you have done in your chosen field of study.

Combined Masters and PhD degree: While in India and in most other countries, a master’s program almost always precedes a PhD degree; in the USA there are universities that allow students to enroll into the PhD program straight out of an undergraduate school. And this trend of pursuing PhD after bachelor’s degree is catching on. A unique thing about this particular type of PhD program is that in addition to the PhD degree, you also end up earning a Master’s degree during the course of your study. So, in that respect, this US degree is a combined MS and PhD degree.

How to apply for MS in USA?

How to apply for PhD after Bachelor’s?

How to apply for PhD in USA?

How to apply for MBA in USA?

How to apply for MS in USA?

Stay tuned to www.studyabroad.careers360.com for more stories on USA

According to the latest updates, of the medical specialists considered the amount of tax paid by a neurosurgeon ranges from 4.4% to 11.5% as per the income.

Compared to Neurosurgeons and Spine Surgeons, who earns more among them in the USA?

Hence, a spine surgeon earns more than a neurosurgeon!

However, spine surgery is considered under neurology department.

But on the whole, it depends upon your experience in the field!

After Completing PG of Medicine in India, How can we become a Doctor in the USA?

After Completing PG of Medicine in India to become a Doctor at USA, the candidate has to practice in post graduation at USA too and then apply for work visa in USA once they get the residency confirmation to continue as a Doctor in USA.

Hope this information helps you.

What is the rich Salary per month in the United States?

Hello.
According to a survey in 2007 it was found that the average monthly salary  of an individual in United state is $ 3,714 . and if you are searching for highest paying job in US  then the list of 25 highest paying job in US  is given below:
The above list is on the basis of the annual salary where the highest paying median salary is of the physician which is $195,842 /year , remember this evidence is on the basis of the survey which was done in 2018 , salary amount may change after latest survey.
Best of luck.

i have completed bcom n passed 2 levels of Chartered Accountancy ..am i eligible for masters?