US Admission- Know all about the admission process 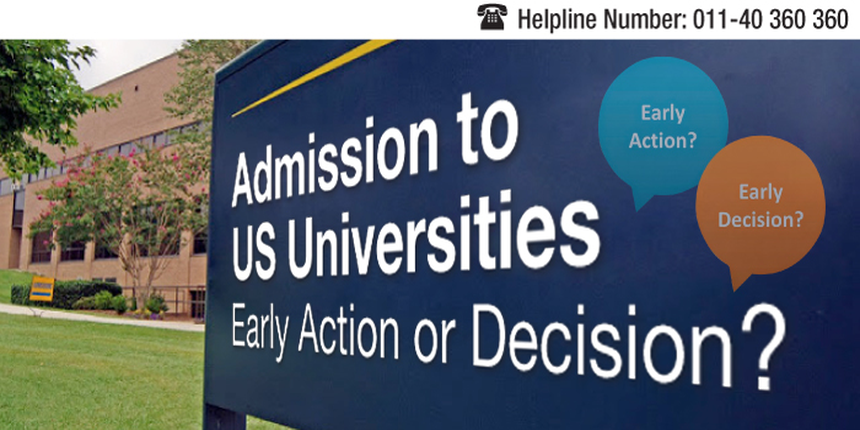 As an aspirant of US based institutions, you first need to understand the broad structure of the admission processes of this most coveted country with respect to academics. The education system of USA has been devised in such a way that it benefits students from various educational as well as social backgrounds. As such, the US has developed a methodical and fairly complex system which makes its slightly difficult to comprehend, especially for international students. However compared to the international education set up, USA offers multiple opportunities even in the application process.

For example: In India, there is just one admission timeline and the process for admission is basically the same. Moreover, a student can apply for admission only when the applications are out on specific dates. However, in USA, an aspirant does not necessarily have to wait for the application process to open for the semester. The flexibility offered by the USA allows the student to apply for the course through three plans - Early admission plan, Regular admission and Rolling admission.

Below , careers360 explains what are these admission plans and why you, as an international student, should opt for them.

Early admission is an accelerated college application process in the US which lets students to apply to their choice of university early i.e., before the regular admission process. Under this system, students have to apply at the universities in November so that they can be notified about their selection by mid-December. The biggest advantage of early action is that it offers higher acceptance rates to students. It can either be binding or non –binding depending on the decision of the student. An advantage of Early admission is that the applicant does not have to worry about applying to a number of universities when the application season opens and, hence, be saved from the rush.

a.  Early Action: The Early action is a non-binding application program, which allows the applicant to choose a school other than the one he/she has been accepted to at the time of early admission. Such applicants can apply to other colleges under regular admission plans. Also, while students receive early notification of an acceptance, they are not required to make a decision until the regular May deadline. A major advantage of this system is that students who are not included in the early acceptance list can still be considered for admission with the regular admission candidates. International students can benefit from early action because it gives them more time to prepare for their move to the US. It also gives them more time to compare and arrange for financial aid.

c.  Early Decision:Under the early decision plan, applicants are bound to the university they apply to. Hence, a student who is accepted as an Early Decision applicant is under a binding agreement to attend the university. The biggest advantage of Early decision is that the acceptance rate is higher for early decision than it is for regular admissions. The problem with early decision is that if an applicant fails to attend the college, he stands to lose his enrollment deposit. Also, if accepted, he/she has to withdraw other university applications. The biggest issue is that students have to decide upon the university before receiving a financial aid package- a problem for international students. Another flipside is that a student who is accepted through Early Decision has no way to compare financial aid offers. However, some colleges have two early deadlines, called early decision deadline I and early decision deadline II. They both work the same way, but the second deadline gives you more time to decide whether to apply early.

Rolling admission offers students a large window of time to apply to a college or university. Under this system, applications of students are accepted for as long as seats are available in the university. The application window usually opens up in Fall, and may continue through Summer. A benefit of rolling admission is that under this plan universities accept applications as they are sent in. It does not have specific timeline. So, students who might have missed deadline for early or regular admission may apply under rolling admission plan. It also gives time to students to research about the universities without worrying about the deadlines. However, the problem lies in the fact that although there are no application deadlines, there are deadlines for scholarships, financial aid and housing application may make it impossible to get any decent financial aid.

Confused about Spring, Summer and Fall? Click here the admission cycle of US universities

Stay tuned to studyabroad.careers360.com for more news and feature related to education in US.