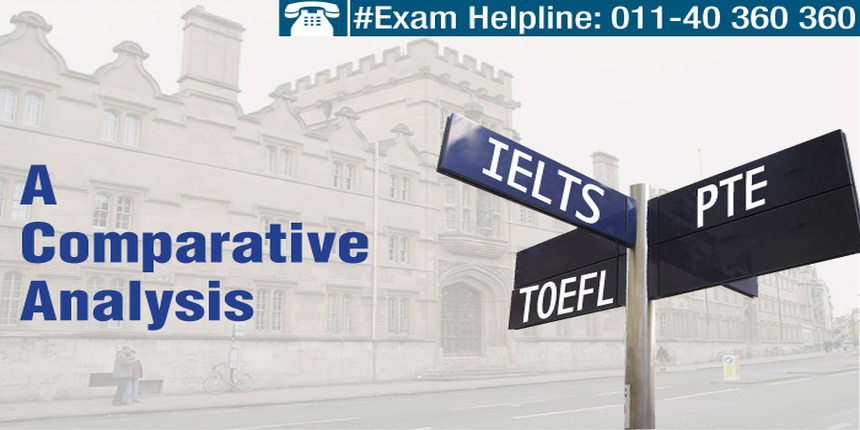 English Language Proficiency is one of the important criteria for international students wishing to pursue their studies at an English-speaking university. For aspirants from countries like India, where English is not the first language for a lot of students, qualifying the English Language Proficiency tests becomes essential. The English Language Proficiency of international students is gauged through certain standardized tests. While TOEFL and IELTS are the more popular ones and are accepted by most number of universities, there are other tests like PTE which are newer entrants in this field. With so many options, prospective students often get confused on which test to choose. Hence, to help students understand the aspects better and make a right decision, we have made a comparative analysis of three of the important and popular English Language Tests: TOEFL, IELTS and PTE.

Test of English Language as a Foreign Language, or popularly known as TOEFL, measures the examinees’ ability to use and understand English at the university level. It scales how well one can combine the listening, reading, speaking and writing skills to perform academic tasks. With a history dating back to 1964, TOEFL is older than IELTS or PTE. TOEFL is the trademark of ETS.

Launched in 2009, PTE (Pearson Test of English) is the newest of the lot that tests and certifies the English language usage of non-native English speakers. PTE is accredited by the QCA and administered in association with Edexcel, UK’s largest examining body.

Versions of the Tests

While both IELTS and PTE are classified on the basis of test-takers, TOEFL is only categorized according to the test-taking format: TOEFL PBT (TOEFL Paper-based Test) and TOEFL iBT (TOEFL Internet-based Test). On the other hand, whereas IELTS has two versions: Academic and General Training, PTE has three versions: Academic, General and Young Learner Test. In both the cases, the Academic version is for students planning for admission into a university and the General version is for non-academic purposes gauging a more realistic communication skills. The PTE Young Learner Test aims to test how well children can use language structures and how well they can use language to complete communicative tasks at the higher levels.

Basics of the Tests

Although TOEFL has both paper-based and internet-based tests, many of the test locations do not conduct the paper-based (TOEFL PBT) format. The TOEFL iBT has more than 50 test dates per year and is conducted in 4,500 test centers across 165 countries. The test can be retaken unlimited times, but cannot be taken more than once in a 12-day period. Also, a candidate cannot register for another test date that is within 12 days of the existing appointment. TOEFL scores are accepted in more than 8,500 colleges, agencies and other institutions in over 130 countries. Candidates can register online, by phone, by mail or in person. Registrations close seven days before the test date while registering online, in person or by phone, and 4 weeks before the test date while registering by mail. The registration fee for TOEFL varies by country.

IELTS score is accepted as evidence of English language proficiency by over 8,000 organisations globally. The test is conducted at more than 900 test centres and locations across more than 130 countries. Each year, IELTS is conducted on 48 fixed dates. While the IELTS Academic Version is available on all 48 dates, the IELTS General Training Version is available on 24 dates. Candidates can register online or via mail. The Registration Fees is INR 9300.

Being a relatively new test, the numbers of candidates taking PTE or the number of organizations accepting it might be lower than that of TOEFL and IELTS, but it is catching up fast. PTE Academic scores are accepted by top UK and US universities and government organizations. It is also accepted by the UK Border Agency (UKBA) for Tier 4 and Tier 2 visa applications and all the universities in Australia. The PTE Academic test is conducted in a number of test centres across 46 countries. In India, the test costs INR 9300. The scheduling for the PTE Academic can be done either online or by phone.

Although all the three tests have similar sections of Reading, Listening, Speaking and Writing, there are certain unique features which set them apart from each other. The Speaking test in IELTS is a conversation with a certified IELTS Examiner which is recorded on an audiocassette or a digital recorder. On the other hand, candidates speak into a microphone and the computer captures the audio in both the TOEFL and PTE Academic. The TOEFL Speaking section is evaluated by a human rater, while the PTE Speaking is evaluated by a computer programme. In case of TOEFL, the Writing section involves writing essay responses based on reading and listening tasks and support an opinion in writing, while in case of IELTS Academic, questions are based on a diagram, graph, process or chart, or an argument. PTE, being newer, includes a lot of innovative question formats. PTE has an automated speech and writing scoring.

All the three tests, TOEFL, IELTS and PTE, have a different scoring pattern. TOEFL scores the candidates on a range of 0 to 120. IELTS evaluates the test takers using scores from 1 to 9. PTE Academic grades the students on a scale of 10 to 90. Given below is a relative comparison of the scores of TOEFL, IELTS and PTE.

The score reports for TOEFL and IELTS are received within two weeks and after 13 calendar days respectively. On the contrary, for PTE, results are available online in just five days. The PTE also sends score reports offering recorded speech samples to admissions offices at universities worldwide. TOEFL and IELTS forward scores to four and five universities respectively for free. The score of TOEFL, IELTS and PTE Academic are valid for two years.

‘Practice to get a perfect score in IELTS’

IELTS and TOEFL: Know the advantages