TOEFL can still be used for visas in the UK: ETS 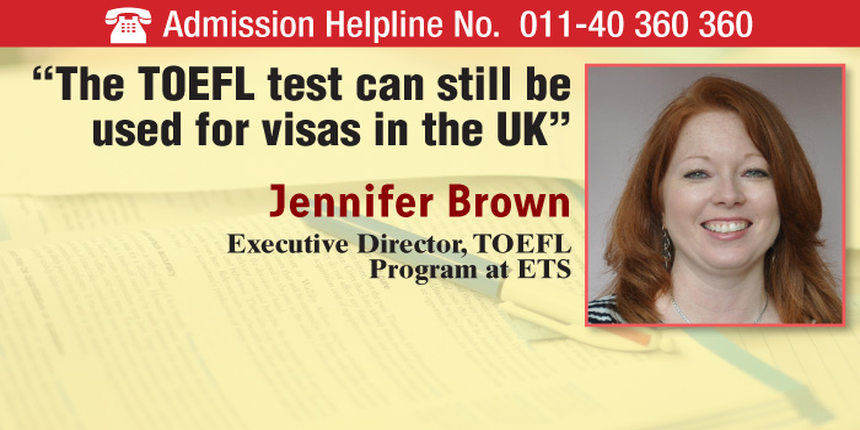 Causing alarm among students, the TOEFL test was recently caught in the middle of controversy after some media reported that the test will no longer be accepted in the UK visa process.

In this interview with careers360, however, Jennifer Brown, Executive Director, TOEFL Program at ETS, brings clarity by stating that TOEFL can still be used to apply for UK visas. Here, the director also lists out the ways in which TOEFL can be utilized in the visa process for studying in UK.

Further, Ms Brown also talks about the recent changes in the TOEFL test and how it impacts its 27 million test takers worldwide.

Below are the edited excerpts from the interview:

Careers360: Media reports suggest that TOEFL is no longer accepted for visas to Britain. Can you provide clarification on the same?
Jennifer Brown: The TOEFL test can still be used for visas in the UK. The recent Home Office concerns were related to the TOEIC test, the Test of English for International Communication, which was created to measure English proficiency in the workplace. The TOEFL test was never the focus of the Home Office’s inquiry.

There are two ways the TOEFL test continues to be used in the UK.  First, through Sept. 30, 2014, TOEFL scores can be used for visa purposes in exactly the same manner as before.

Secondly, beginning Oct. 1, 2014, the Home Office will allow universities to vouch for students applying for degree level programs and higher who submit a TOEFL score as long as they meet certain conditions.

Careers360: How are students and universities reacting on the visa issue?
Jennifer Brown: Many universities have said they continue to have great confidence in the TOEFL test and will avail themselves of the vouching option. Students should contact the institution to which they wish to apply and ask whether they may use their TOEFL scores.

Careers360: Can you give an estimate of the number of students appearing for TOEFL from India?
Jennifer Brown: What we can share is that to date more than 27 million students have taken the TOEFL test.

Careers360: What are the recent changes in the exam pattern of TOEFL?
Jennifer Brown: The TOEFL iBT Reading section was shortened and now consists of a maximum of four passages instead of five. In addition, all of the reading passages and questions have been made available to students in a single block of time. This change to the format allows students to pace themselves better. They can now skip questions and go back later to review them, and change their responses. This change has been welcomed by TOEFL test takers.

In 2013, the TOEFL program awarded US$70,000 in scholarship funding for students in India. Selected from a highly competitive pool of applications, students were evaluated based on their English-communication skills, academic record, leadership skills and extracurricular activities. It was record-breaking year for the TOEFL Scholarship Program in India, as there was a 92 percent increase in the number of applications received in 2013 compared to 2012.

“I wish to become a healthcare business analyst”-Toefl scholarship winner

TOEFL Registration 2019 - ETS® has started the registration process for TOEFL ®. There are three ...

TOEFL 2019 - Educational Testing Service (ETS) conducts TOEFL, one of the most acclaimed English ...

TOEFL Syllabus 2019 - Candidates are assessed on their capability to ingrate the mentioned skill-...

you can register for IELTS exam in the following way:

1. you can register online and pay the fees by credit card (Log on to www.ieltsidpindia.com and Select the option "Register for IELTS" and fill the necessary information).

2.  register in person at idp branch and pay the fees there. identical to the first option.

3. register by courier and pay test fee by demand draft.

you can register for TOEFL exam by online means and or by email or by phone. you can also register in person at a toefl resource center. you will be basically required to visit and create an online profile and then pay the exam fees.

Dear Sir/Mam, I want to do MS in UK in January 2021. Do i have to give both IELTS and TOEFL exams or either? I dont know when and how to start preparation. please Help. Thanks

Giving either of them is ok actually. And for preparations then if you plan to shift in 2021 try to give the exam in around November 2020 if possible and to start it's preparations, as per me it's a 3 months regular studies required to crack the same. So you can start in around July/August to be well prepared to give the exam.

Either the IELTS or the TOEFL is required as part of your application to an English-speaking university and will demonstrate if you will be able to understand the course material.

The IELTS and TOEFL exams are two of the most accepted English proficiency exams around the world. However, both of these tests are different in their structure, approach, and teaching criteria. This means that you need to understand how the two differ before selecting which test to study for and ultimately take.

Dear Sir/Mam, I want to do MS in UK. But cost of study is Expensive. Does scoring good in IELTS and TOEFL helps to reduce the amount of cost ? what else option do i get in order to get admission in UK in minimum cost ? Please Help Me !!

All the foreign Universities offer a scholarship which is on the basis of meriat and need basis . You should try to look for it and inform the competent authority about it . They would help you in every way . They also offers 100 % scholarship to merit and need basis students.

This would help you to study abroad.

What is purpose of toefl exam???

The purpose of the TOEFL iBT test is to evaluate the English proficiency of people whose native language is not English. TOEFL iBT scores are primarily used as a measure of the ability of international students to use English in an academic environment.

how much does it cost overall to study PhD biochemistry at mit uk. and wat should be my GRE and TOEFL/ IELTS scores ?

Dear Aishwarya,
I would like to tell you that PhD in biology is available at MIT, in that you can choose your research area as biochemistry.
PhDs are usually full funded but if theres any tuition fee present then your PI can only tell you about that.

View All Questions
Have a question related to TOEFL ?

All about TOEFL- Complete Guide

Your TOEFL brochure has been successfully mailed to your registered email id .