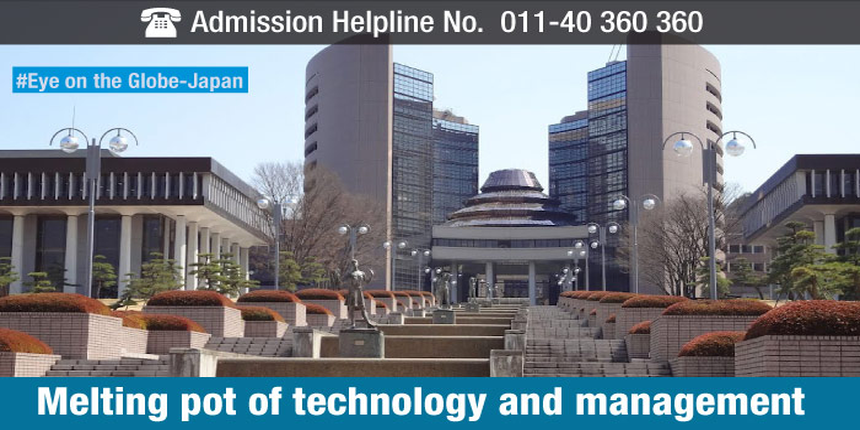 Study in Japan- Japan’s expertise in robotics, automobiles, electronics, aerospace and green technologies is one the many reasons for Indian students to choose ‘the land of the rising sun’ as their study destination. Disaster Management is another subject that has been on the radar of Indian students. “Japan is home to a lot of disasters such as earthquake, floods, landslides and a recent Tsunami. That inspires Japan to come up with disaster management techniques involving structural as well as non-structural measures. Therefore Japan is the place to learn the stream,” says Nitin Srivastava, a doctoral student of disaster management in Japan’s Kyoto University. Nitin bagged Ministry of Education, Culture, Sports, Science and Technology (MEXT) scholarships by Government of Japan to do PhD in Environmental Management from Kyoto University, Japan.

The increased flow of Indian students is reflected in the strengthening of bilateral ties as well. “The Japan government has targeted India as one of the strategic countries this year,” said Hideki Yonekawa, Vice President, Japan Student Services Organization (JASSO), an independent administrative institution established under MEXT.

In this series, #Eye on the Globe, we present you Japan as a destination for education. Find all your answers regarding Japan - the best colleges, top courses, admission cycle and how much you need to invest to get a high- quality degree from the country.

Q. Why is Japan a destination for education?
A. Ranit Chatterjee, a Monbukagakusho research scholar who is pursing doctoral research on disaster management at Kyoto University, points out that Japan has been a favourite destination for Indian students for almost a century now and provides world-class education with a few of the universities in Japan making it to the top 50 universities across the world. “The country offers a visual treat to every eye and creates unforgettable memories in the heart with its beautiful shrines, zen gardens and cascading rivers,” added Ranit.

Q. What is the admission cycle in Japan?
A. The sessions usually begin in four terms; in the months of January, April, July and October. Application process begins around eight months prior to the beginning of the course. And, the visa application needs to be submitted around four months before the desired semester start.

Q. What are the job prospects for an Indian student after completing studies there?
A. There are about 1000 Japanese companies like Sony, Mitsubishi, Sumitomo, Marubeni, Toshiba, Itochu, Hitachi, Mitsui, Nissan that are already expanding in India. It looks like the number of Japanese companies in India is going to rise as companies like Toyo Denki Real, Shiseido, Rakuten, Sakura, en-Japan and a few more are planning to invest in India soon. In terms of job prospects, many Japanese companies have started eyeing Indian market and hence they want to hire Indians with understanding of Japan’s culture and language.

Q. What is the duration of courses in Japan?
A. For Undergraduate programmes, the duration is 4 years with the exception of medicine, dentistry and veterinary science department, which require six years of study. For Master's programme the duration is generally two years while a Doctor's programme requires five years to complete.

Q. Which region (city) attracts the most number of Indian students?
A. Large cities like Tokyo, Osaka and Kyoto are extremely safe and easy to get around with excellent public transportation system, which includes shinkansen, the bullet trains of Japan. “Kyoto, it the most student-friendly city in Japan,” said Kawaguchi of Ritsumeikan University.

Q. What role does the location play in a student’s preference for education in Japan?
A. In Asia, Japan plays a geopolitically significant role in balancing the emerging powers of China and India. An education in Current Affairs, Economics, Arts and Humanities in Japan will provide a unique insight into international relations between Asia’s powers and their impact on the region and the world.

Q. What is the cost of education in Japan?
A. According to JASSO, the average monthly expenses (including academic fees) of an international student vary from 114,000 yen to 154,000 depending on the city or region.  On an average, monthly living cost is around 860 yen, excluding course fee.

Q. Is there a mechanism, which eases one’s search for financial needs?
A. To lighten the financial burden, almost every university offers scholarships/waivers to deserving students. A few notable scholarships provided by the Japanese Government are: Japanese Government Scholarship for Young Leader’s Program for students pursuing master’s programme in the field of Public Administration, Local Governance, Law and Business Administration. It includes an allowance of 242,000 yen per month. Candidates are exempted from fees for the entrance examination, matriculation and tuition; and candidates might be provided with accommodation by the corresponding institution.

Monbukagakusho Scholarship for College of Technology Students or MEXT (Ministry of Education, Culture, Sports, Science and Technology) is for the undergraduate students to study various technology programmes in Japan. The value of the award is 117,000 Yen per month.

Both modern and steeped in tradition, in Japan, the latest technology and ancient crafts, buildin...

Showing 3 out of 3 Questions
15 Views

View All Questions
Have a question related to Japan ?
Never miss exam and college updates Login