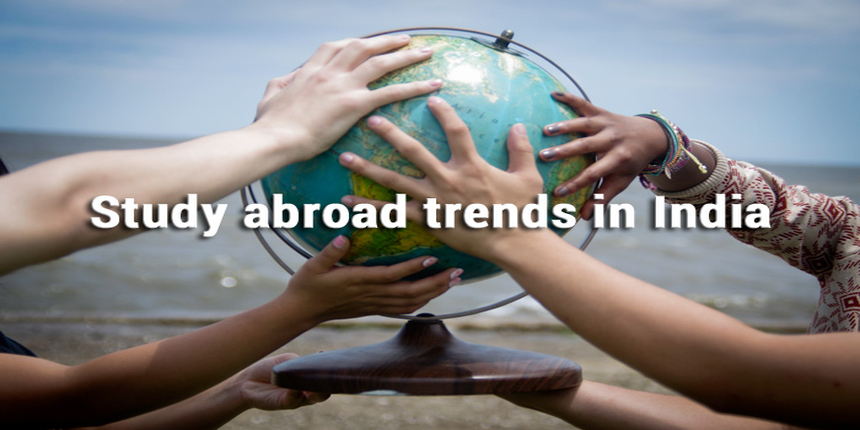 Study abroad trends - The Indian “Study Abroad” market is growing and expanding by leaps and bounds. With the country’s outbound student mobility zooming past the 300,000 mark, India has strengthened its emergence as one of the top source countries for international students.  According to a report of Indian Students Mobility 2015 on study abroad trends, India is the second largest source for international students in the world after China. However, a record 10% growth in the number of outbound students over China’s 8% in 2014 is proof that India is set to soon topple all countries to be the largest source of international students in the world.

Currently, there are nearly 5 million international students in the world but the exciting news is that the Organisation for Economic Co-operation and Development (OECD) has predicted that the number would grow by a massive 60% in the next decade. The growth of the middle class, especially in the developing economies, which earlier found it hard to afford foreign education, has been a major stimulus driving growth in the Study Abroad market. As Dr. Simon Marginson, professor of International Higher Education at University College London and Joint Editor-in-Chief of the journal, Higher Education, puts it in his report: “The number of middle class people in Asia is expected to rise from 600 million in 2010 to more than three billion in 2030 and middle class families want tertiary education for their children.”

An interesting point to consider here is that India’s claim to the most number of international students is mostly driven by five major countries- US, UK, Canada, Australia and New Zealand. These five countries alone cover nearly 85% of the total outbound students from India with the USA leading the block.

Owing to changes in the immigration laws, the UK, which had for long maintained a stronghold among international students, especially from India, has witnessed a fall in the numbers by as much as 12%. However, UK’s loss has been smartly channelised by other countries like Australia and New Zealand with the latter registering a massive increase by 49% between 2013 and 2014.

Here are the big five players for outbound students from India:

Unarguably the most favored study abroad destination - despite its falling strength (The USA had covered 23% of the internationally mobile students market in 2000, which has now dropped to around 16%), the American universities have done very well to retain and grow the student base from developing economies. In fact, America’s market share grew by 8.1 % in 2014 strengthening its position as the top study destination in the world.  Interestingly, the US saw an almost 32% increase in students’ enrollment from India as it grew from 113,649 in July 2014 to 149,999 in July 2015.

The numbers for the 3 major streams reflect positive changes–

Number of Indian students in Canada over the years | Create infographics

In the United Kingdom, the total number of international students for the year 2014 increased by around 2.5%. But the number of Indian students has taken a massive hit, reducing by close to 12%. Changes in the immigration laws, in the light of increasing visa fraud cases, has pulled down the share of Indian students in UK to almost 4.5% from its peak at 9.5% in 2010.

One of the biggest gainers of the fall in popularity of United Kingdom has been Australia. After four years of continuous decline since 2009, Indian students’ enrolment across universities in Australia shot up by a massive 28% in 2014.

Interestingly, Victoria is one of the places which attracts the most number of Indian students. According to Annie Santhana, Director of the Victorian Government Business Office, in September 2014, over 50,000 Indian students enrolled across Australia, out of which half of them (25,000) were enrolled in Victoria.

More important is the fact that Indian study abroad market is not concentrated in the Metro cities alone. The study abroad trend has definitely changed with students from tier 2 and tier 3 cities such as Chandigarh, Rajkot, Coimbatore, Nagpur, Madurai and Trichy applying for higher education courses in Australia.

As for the education front in New Zealand, the Chinese share of inbound students fell slightly from 32% in 2012 to 29.1% in 2014, while the Indian share shot up from 10.5% to 15.8% (a 50% increase).  The share of Indian students in New Zealand was stuck at 10,000-11,000 mark for 4 years before this explosive rise, which comes at the expense of UK as a study abroad destination. According to Education New Zealand, first-time study visas issued to Indian students spiked dramatically in 2014, increasing by 123%.

Just a glimpse of the five major study abroad destinations is sufficient to prove that the Indian student recognizes the value of the exposure and experience of international education. They are now exploring more and more options, whether it is varied fields of study in the traditional countries or other emerging countries that were not previously labelled as study abroad destination.