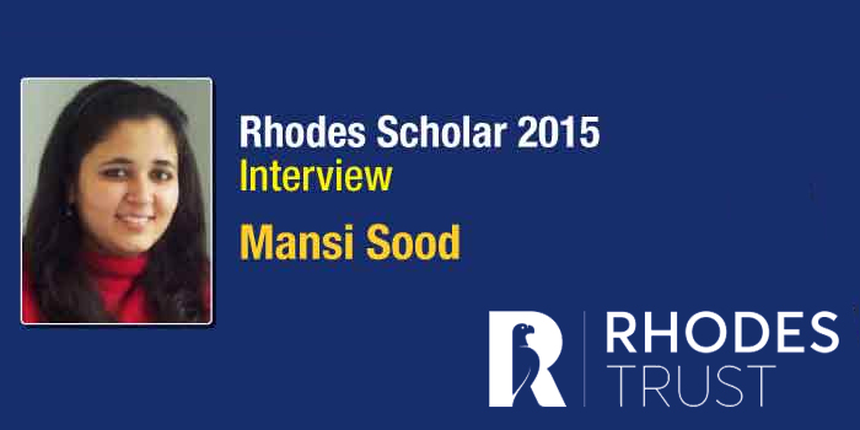 Q: Why did you choose University of Oxford to do Bachelor of Civil Law?

A: There are two major reasons. First, because I think the kind of courses that are taught in the BCL are not taught elsewhere. And second, because of the faculty at Oxford, which is world-class, to say the least. This is obviously aside from the most obvious reason, which would be the academic environment at Oxford and the fact that it is one of the top universities for law across the world.

Q: Why did you choose UK as your study abroad destination? Were there any other universities or countries in your mind while applying?

A: I don’t think it was as much a decision of the destination country as of the university itself. Universities in the US were also on my mind.

Q: Did you apply for any other scholarships apart from Rhodes?

A: I intended to, yes. Thankfully however, the need for that didn’t arise. To the best of my knowledge, the applications for most other scholarships commence after one has been granted admission and their deadlines are therefore much later in the year.

Q: You are one among the five Rhodes scholars from India. How do you analyse the competition in getting into a world class university with a highly competitive scholarship?

A: I think the competition is extremely fierce and I’m sure the margins are very narrow. At the end of the day, five have to be picked and there is definitely an element of luck involved in who ultimately makes it.  I had an opportunity to meet all the other 17 finalists for the Rhodes scholarship and even though our interaction was brief, I learnt a lot from each one of them.

Q: Could you please brief the application process of Rhodes scholarship?

A: The application process is simple and involves two stages – the written application and the interviews. Applications are online and open sometime in June and the deadline is usually end of July. Once the written application is submitted, there are two rounds of interviews - a preliminary one and then a final one. At each stage, applicants are eliminated. Around 18-20 applicants make it to the final interview and then five among them are selected as Rhodes scholars.

Q: How do you want to explore and experience your life in the UK during your studies in Oxford?

A: To be honest, that is a question I am still finding answers to. I have some things in mind, but I also know that there are countless things that I am unaware of. So I am just going to go with the flow.

Q: What are your future plans after completing the course?

A: My interest lies in commercial law, with a primary focus on arbitration and intellectual property laws and that is what I want to pursue. I haven’t thought about exactly what I want to do but it would be a mix of practice and academia/policy work.

Q: What are your interests and hobbies?

A: I have been involved in several co-curricular and extra-curricular activities, right from the time I was in school. Dance has always been my biggest passion and I enjoy singing as well. I am also a keen badminton player. But apart from that, I have picked up mooting and some debating in law school.

Must-read: From application to arrival