Russia has become a favourite study destination for international students. Here’s a list of popular courses in Russia.
Study Medicine in Russia:

Russia has one of the most advanced higher education systems in the world. Every educational institute is well equipped with excellent teachers and research infrastructure. Their teaching methods are well evolved and they extensively focus on all round development of a student in his/her specialities. There are over 2 million students enrolled in Russian universities or institutions. The teaching staff of institutions comprises over 16,000 doctors of science and about 0.9 million candidates pursuing science who, apart from teaching, are involved in research and development of scientific and technology innovations.

Why study Medicine in Russia? 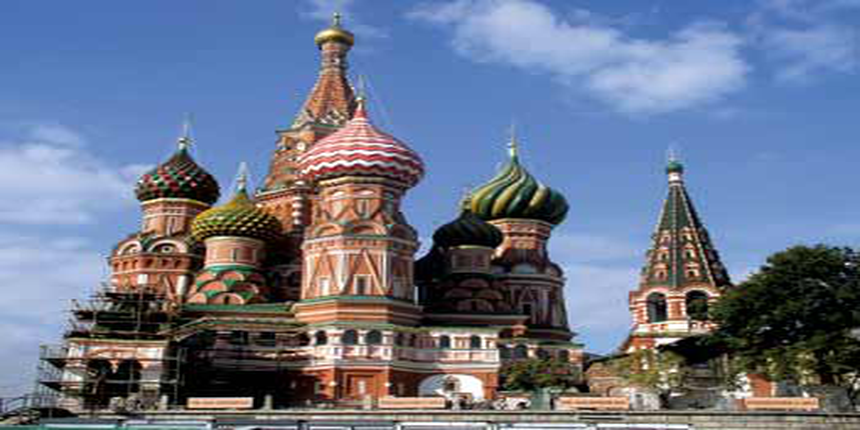 The greatest advantage of studying medicine in Russia is that the study expenses in Russia are very low as compared to that of western countries. You can expect to complete your MBBS course (MD in Russia) with a tuition fee of USD 4000 per year.

Eligibility for admission for medicine in Russia:

Courses offered and duration for Medicine in Russia

In Russia, Medical courses are offered in both English and Russian languages.

If the medium of instruction is Russian, then the six-year medical course will be preceded by a ten-month preparatory course in Russian language. On completion of the 6-year medical course, you will be awarded with MD (Doctor of Medicine).

Russia has benefited from 300 years of history in engineering education and the same period of industrial progress. The beginning of engineering in Russia was laid by the foundation of the School of Mathematical and Navigational Sciences in Moscow in accordance with Tsar Peter the Great’s Decree dated 27 January 1701 (new calendar). The Decree put special emphasis on the fact that the school needed not only sea-sailing and engineering, but also artillery and civil use.

The total number of students at the school was defined as 500, but at times went up to 700. The school taught mathematics, geodesy, sea sailing, cartography, astronomy and a number of other engineering and technical subjects. It was soon placed in the building of Sucharyovskaya Tower, which incorporated special laboratories equipped for practical studies and an observatory. The navigators practiced on sea ships and made geodesic maps. By the time of establishment, the school was the first and the biggest educational institution in Europe of its type.

The Moscow Aviation Institute (National Research University) is one of the world’s leading engineering universities dedicated to aerospace technologies. More than 140,000 students including 1,000 international students from 40 countries have graduated from MAI after its foundation in 1930. During the early 1930’s, MAI amounted to only 290 students in two schools. But since the beginning of the twenty-first century, the university of aerospace technologies consists of more than 1,700 professors and lecturers, including both 300 full-professors (D.Sc) and 800 associate professors (Ph.D) who teach more than 20,000 undergraduate, graduate, and postgraduate students at 10 schools, 3 institutes, and 4 branches of the university. The university includes among its alumni about 100 general and chief designers, 43 members and associate members of the Russian academy of science, 250 State and Government Prize laureates, and 21 cosmonauts who spent a total of 12 years in outer space. The present day MAI is a unique institute of higher education where a thorough theoretical knowledge combines with various practical skills. More than 120 laboratories, 3 student design offices, numerous computer centres, an experimental-design factory, and an aerodrome are available for the students. In October 2009, the MAI was ranked among the 12 best universities of the Russian Federation. The rank of a “National research university of aeronautical and astronautical engineering” was conferred to the institute by decision of the Russian Government. The Moscow Aviation Institute is an advancing multiple-discipline academic and research centre which provides students with the current-technology knowledge to rank as a qualified scientist and engineer all over the world.

Know the academic calendar of the institutes and universities ...

Need to go for MDS course in Russia after my BDS. Can you please suggest as how can I get admission there.

You have to appear for selection into any college. Choose any college which you find suitable. Check how the college selects candidates. Prepare for  it and give your best. After you get your call letter, you can go and take admission.

Is you want to study in abroad then go to Nepal they provide best facilities and study and also u,ll be comfortable their as people's of thier are like Indians only and the cost will go around 30 to 35 lakhs total
Read More
Answer
Answer Later
Report
37 Views

studying MBBS in Russia is use full ?

Yes, you can study MBBS in Russia. But let me remind you the problem which you may face while studying or while applying.

1. There are many fake Universities in Russia providing fake degree that too without having a Hospital.

2. A lot of 3rd Party Corruption During the admission time.

I have completed my MBBS from Russia now I want to do PhD in Clinical Psychology from SPPU Pune.. For PET what is syllabus?

Sonal, here is the pdf format of PET Syllabus for Psychology. You can download it from the official website; http://collegecirculars.unipune.ac.in/sites/documents/MPhilPhD%20Admission%20PET%20Exam%20Syllabus/Psychology.pdf It is a 4 page pdf and so we are helping you wtih the link. Hope this helps.

i have done my mbbs from russia and i am going to pursue my post graduation here itself.. or some other place abroad.. do i have to give any entrance after returning to india after i complete my pg abroad?? please guide

To practice in india as registered doctor by MCI the foreign medical graduate has to pass the FMGE exam.

Thoso who obtained their PG from abroad are not recognized by MCI and there is no such exam to get recognized.

It is in discussion that for post graduate medical aspirant who obtained their pg from abroad, a similar exam like FMGE should be conducted by DNB so that they can practice in india. And MCI is also looking forward for this. However as of now there is no such exam for foreign medical pg aspirant.

You can give FMGE and after clearing that apply for neet pg to study pg in india.

View All Questions
Have a question related to Russia ?
Never miss exam and college updates Login