‘GRE measures skills important for success at the graduate level’ 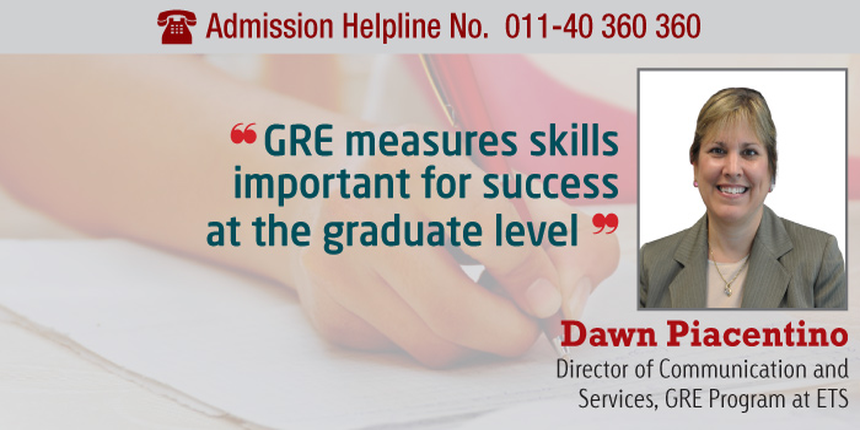 Boasting an increasing popularity among Indian test takers, GRE is displaying record test takers of more than 90,000 annually in the country.

In this interview with Careers360, Dawn Piacentino, Director of Communication and Services, GRE Program at ETS, talks about the factors that has led to such rise.

Piacentino also discusses about the changes made to the GRE exam pattern and the impact it has had on the test takers.

Below are the edited excerpts from teh interview:

Careers360: Can you give an estimate of the number of students appearing for GRE from India?
Dawn Piacentino: In 2013, GRE volumes in India increased by more than 70% over 2012, recording annual GRE test volumes greater than 90,000 from that region alone. We have not yet released 2014 data.

Careers360: What according to you are the factors behind the increase in GRE takers?
Dawn Piacentino: The GRE revised General Test is the world’s most widely accepted admissions test for graduate and business schools.  No matter what advanced degree a test taker is considering, he or she will have more opportunities for success with the GRE revised General Test. In fact, in addition to the thousands of graduate schools around the world accepting GRE scores for their master’s and doctoral programs, more than 1,100 business schools worldwide also accept GRE scores for admission to MBA, specialized master’s and other graduate business programs. The test measures the skills that are important for success at the graduate level: verbal reasoning, quantitative reasoning, critical thinking and analytical writing.

Careers360: What are the recent changes in the exam pattern of GRE?
Dawn Piacentino: When the GRE revised General Test was introduced in August 2011, it represented significant changes.

Some of the enhancements include the following:

In addition, it is important to note that the ScoreSelect option was introduced in July 2012. Now students can select the scores from their history that they want to send to institutions.

Careers360: How does the change impact the students appearing for GRE?
Dawn Piacentino: The GRE revised General Test better reflects the kind of thinking students do in graduate or business school and provide an even better test-taking experience. The new types of questions more closely align with the skills needed to succeed in today’s demanding graduate and business school programs.

Careers360: The GRE is increasingly giving competition to GMAT for admission into business schools. What is ETS doing to give GRE an edge over GMAT?
Dawn Piacentino: The GRE revised General Test is the ONLY admissions test that is accepted by graduate and business school programs worldwide, giving test takers more opportunities for success.  It is also the only test that features a test-taker friendly design that lets test takers use more of their own testing strategies.  The GRE revised General Test also features the ScoreSelecttest takers decide which scores to send so if they take the test once or more than once, test takers can send only the scores they want schools to see.

GRE changes at a glace