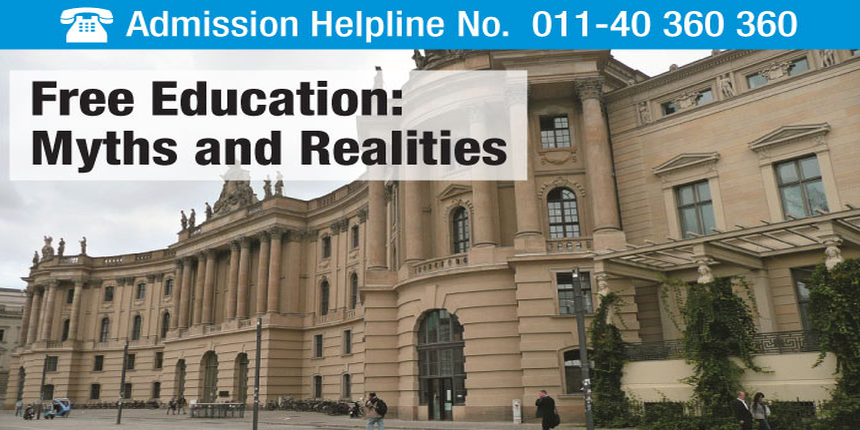 With Lower Saxony becoming the last state to announce the abolition of tuition fee, Germany joined the league of countries that provide tertiary education for free. Now the public universities provide free education to all, including international students. Prior to the abolition, Germany had a minimal tuition fee of EUR 500 per semester, which is almost half of the monthly living expenses of a UK student or the amount spent by a US student on books.

Excited? It looks like a good bargain if you are a student yearning to get a degree from a foreign land. But before you start packing your bags, better understand the various aspects of ‘free education’.

Is education in Germany really free?

If you expect ‘no cost involved’ when they say ‘abolition of tuition fee’, well, then, you might get disappointed because the education in Germany is not ‘free’ in absolute terms. Remember, there’s no such thing as a free lunch. The universities charge a certain amount from both German and international students as student union fee, administrative costs and semester ticket.

The biggest expenditure a student has to bear is not necessarily the tuition fee. An international student must take care of various expenses such as housing, food, travel and health insurance costs. The average cost of student dormitories is EUR 250 and private housing is EUR 350. The student must shell out around EUR 800-1000 per month on food, travel and other expenses. Hence, the abolition of tuition fee does not make higher studies completely affordable in Germany.

Studying in a German University?

Apart from bagging a degree, many students expect a world-class, unique study experience from a foreign university which includes maximum global exposure, state-of-the-art infrastructure and various extracurricular activities that give them an opportunity to explore their areas of interest and mingle with students from various communities. While these are the unique selling points of most of the top destination universities, the universities in Germany are different. What you can expect here is classrooms and libraries not sports centres, health clubs and film societies.

“Germans are generally lazy when it comes to extracurricular activities. The out-of-the-classroom activities are definitely lower than in other countries such as the UK and the US. German students structure their lives very much independently from university activities and most generally the level of involvement is lower. This in particular applies to sports. While certain universities offer some form of sport clubs, they are only attended by very few students. There is generally less of a “community spirit” at German universities”, says Magdalena Kuenkel, who completed Bachelor’s Degree in Business Administration from Germany's Hamburg School of Business Administration.

The international experience is something that a student takes home along with a degree from a foreign university. Many universities across the world provide the opportunities to students to get to know each other through improved social life by providing them with in-campus accommodation and organizing various residential social events. However, the German students prefer staying with parents or renting apartments outside the campus mainly due to the poor quality of university dorms. The amount of time spent by the German students in the campus is very less compared to other countries, which further reduces the chances of an international student to get first hand knowledge of the country and its culture.

Academic advice and faculty support are two major features of universities abroad where the academic supervisor monitors the performance of each student. But you shouldn’t expect this personal academic guidance if you choose to go to a German University. Generally, the university classrooms are packed with an average of 200 students for graduate courses, which makes it difficult for the professors to even remember the face of his students. “Sometimes it is very difficult to understand the student-teacher ratio in German universities.  Indeed, for some undergraduate classes, there are main lectures with up to 250 people. However this varies significantly across universities and also field of study. Private universities generally have better student-teacher ratio as compared to public universities”, says Magdalena.

There are many countries where you can survive without knowing the local language if you are fluent in English. But Germany is an exception. Even though the German universities have started offering English-taught programmes, knowledge in German is inevitable to survive in Germany.

“Germany today offers over 1600 international programmes across all subject fields with English as the medium of instruction. Of these a majority are conducted in English medium where no knowledge of German is required. However, the DAAD encourages Indian students going to Germany to learn the German language as it ensures a smooth integration into the cultural fabric of Germany. Having basic German language proficiency helps in getting industry internships and part-time jobs. Language skills play an important role in improving employment prospects”, says Aditi Gosavi, Senior Advisor - Public Relations and Communications at German Academic Exchange Service (DAAD).

Is German free education a good model to replicate?

“The OECD in its latest report found that UK has a sustainable education system, which is good for both students and tax payers. Since the universities sustain by charging the education imparted to the students, they are robust, independent and competent with strong financial foundations. This, in turn, reduces a huge burden on the government”, says Greg Clark, Minister of State for Universities, Science and Cities, the UK.

Of course, nothing comes for free in this extremely competitive, market-driven economy of 21st century. The German higher education is very science-heavy with much focus on research. It is extremely expensive to maintain and run such kind of an education system, especially when the students are not paying for it. Now, the question arises. Who will pay for the free tertiary education? The German public universities are funded by the state which, in turn will pass over the burden to the common man in the form of taxes. Germany has the second highest income tax burden among the 34 Organisation for Economic Co-operation and Development (OECD) countries. According to the 2012 estimates, the Germans pay 49.8% of their income as tax.

The third party payment system is not only adding the tax burden but also causing a moral hazard due to the insensitivity of the students. Since the education is free, the students take additional years to complete the course. The average graduating age of a student in Germany is 28 years as compared to 24 years of a UK student, says a report commissioned for European Commission Framework Project. While the UK and the US students are burdened with education loan and high competition in the job market, the free tertiary education gives leniency to German students to take their own sweet time to complete the course. Germany is also notorious for its Dauer Studenten (eternal students) who are enrolled in a university for up to 20 years.

Quality is a plus point

These factors make a student to have a second thought before applying at a German university. However, the universities in Germany find a place in the world university ranking every year due to their high quality scientific research. The Times Higher Education Ranking 2014 places Ludwig-Maximilians-UniversitÃ¤t MÃ¼nchen at 29th position and Ruprecht-Karls-UniversitÃ¤t Heidelberg at 70th position. Technische UniversitÃ¤t MÃ¼nchen obtains 54th position in QS World University Ranking. The number of Indian students enrolled in German universities increased by 27.71% in 2013-14. If you are a student with good knowledge in German and high motivation, Germany is your best study abroad destination which gives you a degree without burdening you with much financial liability.

Germany: Admission and Visa Guidelines
Work in Germany after studies
Know all about Studying in Germany