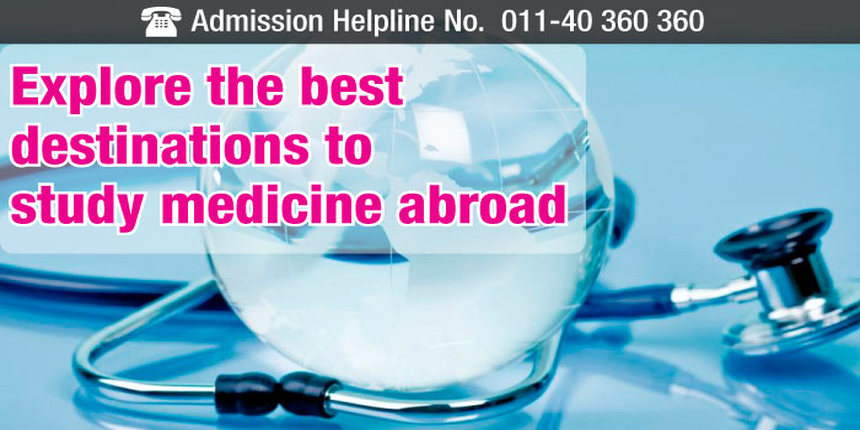 Top medical destinations in the world- An increasing number of medical aspirants are leaving for foreign shores as the cost of medical education in India touches a new high year after year.  From just around 2500 in 2004, the number of students leaving India to pursue medicine abroad has crossed over 9000. Interestingly, it is China which gets the biggest share of the pie with over 6000 students from India to study medicine. One of the major factors behind China’s popularity among Indian medical aspirants is the affordable cost of education as most universities in the country are highly subsidised by the Chinese ministry of public health.

The affordability factor scores high for two other countries, namely, Russia and Ukraine which follow China in the popularity scale among Indian medical aspirants. “I knew I wanted to pursue medicine abroad and Russia is known for its quality training in medicine,” says Dr. Devesh Chatterjee, who pursued MD from Smolensk State Medical Academy in Russia.  “The most important factor for me was that Russian medical schools are affordable and there is no donation involved in the admission process. Also, I did not want to lose another year preparing for the entrance exams in India,” he adds.

Know here the top medical destinations in the world:

One of the most sought after study destinations for Indian medical aspirants, China has over 6000 Indian students pursuing medicine in its various universities. As of 2014, 52 medical institutions in China accept international students in their programme with English being the mode of instruction in all the 52 institutions.

The admission season for medicine studies in China starts in October and the duration of the MBBS programme is similar to that of India i.e 5 years.

One of the most popular destinations for medical aspirants from India, Russia has over 5000 Indian students studying in its medical and technical institutions. Interestingly, the Embassy of India in Moscow states that 99% of Indian students in Russia are pursuing medicine. Many Russian medical colleges have started offering these programmes in English.

Currently, the country has over 50 medical colleges. You can get a general medicine degree in 6 years while a dental degree takes 5 years to complete. One of the major reasons why Russia scores over other countries in medicine studies is the low cost of education. While the course fee can be anywhere between Rs. 6 to Rs. 11 lakhs the cost of living in the country is around $200.

The academic season in Russia starts in September and there are two seasons in an academic year i.e., from September to January and from February to June.

One thing to keep in mind is that unlike India, Russia offers an MD degree covering a duration of 6 years and an additional one year for Russian language. The Russian MD degree is considered equivalent to an MBBS degree.

With over 5000 Indian students pursuing medicine in the country, Ukraine has positioned itself as one of the most popular destinations for Indian medical aspirants. One of the factors for this popularity is the cheap tuition fee offered in the country’s medical schools along with its affordable cost of living.  Annually, a medical student in Ukraine spends Rs. 3,00,000.

Ukraine’s medical degree is accepted all over Europe, except UK. So, medical graduates from the country are usually known to go to practice medicine elsewhere in the continent. Hardeep Singh, who runs the BobTrade Education Group, says: “Most of the medical colleges in Ukraine use English as the medium of instruction. Also, Ukraine follows the same education structure as practiced in most European countries. Hence, it is easier for students to consider destinations across Europe once they have passed out.”

Home to some of the best medical institutions in the country, the US attracts thousands of medical aspirants every year. According to the Association of American Medical Colleges, over 1500 international students applied for the MD programme in US medical colleges in 2013.  The Open Doors report 2014 lists health profession as one the top fields of study for international students in the US with 31, 954 enrolled in various programmes within the field.

Common degrees offered by US medical schools include Doctor of medicine or Doctor of Osteopathic Medicine programmes. It takes 4 years to complete Medical school in the US following which there is a 3 to 7 year residency programme for training.

Most colleges require students to apply through AMCAS. While the perquisites vary for different schools, a majority of them require MCAT or DAT score for admissions. MCAT and DAT scores are accepted for admission mainly to medical institutes in the US, Canada and some other countries.

Medicine is one of the most competitive fields in the United Kingdom with thousands of international students applying for various programmes in the country. UK is home to some of the best medicine institutions in the world with names such as the University of Oxford, Cambridge University and Imperial College London making the biggest impact.

A majority of the universities offer Bachelors degree in medicine and surgery i.e., MBChB or MBBS which can be completed within a duration of three years.

Applications to medical colleges are generally aceepted through UCAS. Aspirants are also required to appear for separate medical entrance exams- BMAT or UKCAT.

While US and UK lead the competition for the most sought after destinations for medical studies and Russia continues to lure international students with its cost effective programmes, Australia, too, is steadily picking up as an emerging destination. According to the Snapshot data by Medicaldeans, the international graduate enrollments in medical schools across the country increased from fewer than a 100 in 2008 to over 600 in 2013.

The International students admissions test (ISAT) or MCAT are the gateways for admission to majority of the medical schools in the country.

Recognised worldwide for offering high quality education at an affordable cost, Germany’s higher education landscape has grown steadily over the years with a number of universities making it to the top of the ranking scale. Germany hosts many medical schools which provide ample scope for medical education as well as research. Currently, there are more than 7000 international medical students in Germany.

Germany is best known for its university hospitals which provide the troika of medical training, research and patient care within the same institute. Besides, the country has around 6 German Centres of Health Research and 21 Competence Networks in Medicine which conduct research in diseases.  Interestingly, medicine studies in Germany is not divided into undergraduate and postgraduate levels. However, the first academic degree in medicine is earned after 5 to 7 years of study although the human medicine course is of 6 years.

How do you get evaluated in India?

In order to practice medicine in India, foreign medical students are required to go through a screening test, namely, FMGE. Conducted by the National Board of Examinations, the Foreign Medical Graduate Screening Exam is held twice a year for students with medical degrees from institutions outside India. The exam is generally held in the months of June and December.

However, the screening test is known to be most rigorous for its takers. Devesh says: “The passing percentage is hardly 3 to 4%. This is mainly because of the difference in the paper and education model. While abroad the focus is more on practical training and research, in India the exam follows the MCQ format which is difficult for many students to switch to.”