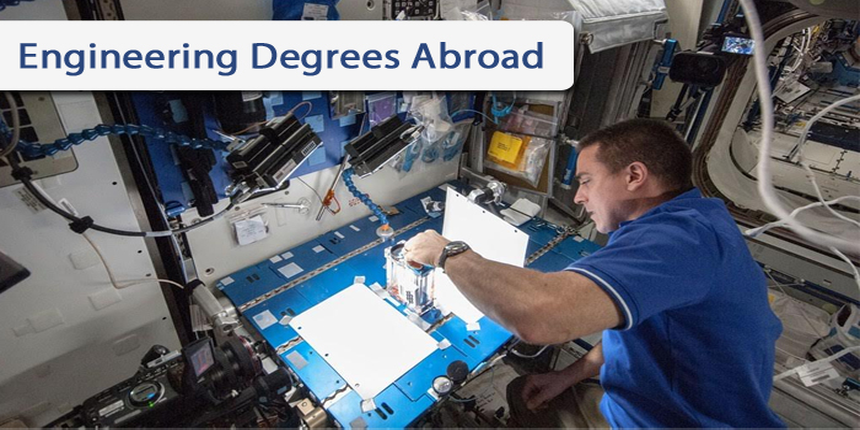 Engineering degrees abroad: Engineering and technology is, perhaps, one of the most highly rated subjects offered by universities across the world. One of the main reasons is the career opportunities presented by the field be it in the automotive or energy sector. Another factor is that engineering degrees ensure the best returns on their investments, especially, international students. According to the National Association of Colleges and Employers (NACE) in USA, the average salary for engineering graduates is just over $63, 000, which is among the highest in the world. Further, Civil, Petroleum and IT engineers are some the highest paid employees in the world.

Engineering is a wide field with a plethora of opportunities. Before, applying for engineering courses abroad we should first know about the variety of degrees on offer at universities across the world. While most of us associate an MS degree with engineering, there are variety of degrees on offer worldwide. Besides, the duration of engineering degrees abroad also varies according to the country. For example, while US offers a 4 year BSE degree, in Australia and Canada, the duration for an undergraduate engineering degree is 3-4 years.

Here we have explained in detail the types of engineering degrees across 5 countries- USA, UK, Canada, Australia and New Zealand.

The United States is, perhaps, one of the most sought after destinations for students who plan to pursue their engineering degrees abroad, both for undergraduation and postgraduation. As a matter of fact, of the over 149,999 Indian students studying in USA, a massive 81% are pursuing STEM (Science, Technology, Engineering and Management) subjects of which majority are enrolled in engineering courses. Quality programmes focused on research centric education is what makes USA a natural hub for engineering students to learn and explore the field and its various specialisations.

As in most other countries, engineering in USA is offered both at the UG and PG level. At the undergraduate level, US universities offer a Bachelor of Science in Engineering (BSE) degree after completion of four years of study. The BSE degree in USA is equivalent to a B.tech or BE degree. At the Master’s level, US universities offer both MS and ME degrees, interchangeably. The duration of the MS or M.Eng degree is, generally, two years.

US universities also offer many inter- disciplinary courses, especially in engineering. Some common examples are engineering management, Information management, among others.

UK is, perhaps, one of the top places to pursue engineering studies. Every year, thousands of international students enroll in UK’s engineering colleges to take advantage of its quality education focused on research oriented studies. In 2013-14, nearly 33% of the total number of foreign students in the UK were enrolled in engineering programmes, second only to business management.

Engineering degrees in UK are offered both in the bachelors and postgraduate levels. However, most engineering colleges in UK offer an integrated Masters’ degree covered within four years of study. Undergraduate students are enrolled in a four-year programme and they emerge with a Masters in engineering.

In postgraduation, students are offered an MPhil or MST degree in engineering which can range from 1 year to above 3 years.

Canada has many universities which are popular for their engineering courses. It is one of the most sought after education destinations for international students, especially among Indian students. Currently, the country has over 3 lakh international students studying in its various universities. Just like other countries across the globe, Canadian universities, too, witness the largest influx of foreign students who want to pursue engineering degrees abroad.

Among the top three countries attracting the largest number of international students in the world, Australia is home to over 6 lakh international students with the number of engineering students being second only to management. Australia’s focus on practical education has pushed many of its universities to the top of the charts in most of the major rankings like Times Higher Education, QS and ARWU, among others.

Engineering degrees in Australia are offered both at the Postgraduate and Bachelor’s levels. Many Australian universities offer a Bachelors’ in Commerce and environmental science besides the general Bachelor’s in Engineering. At the postgraduate level, a majority of the universities offer a Master of Engineering degree while some offer a Master of Professional Engineering for students who want to change careers and become an engineer or simply change their engineering specialisations.

Among the emerging countries, New Zealand is definitely taking nimble steps on its way to becoming one of the top attractive study destinations for international students. In 2015, the New Zealand government issued over 91,000 student visas, an increase of 13% over the previous year.  The country has, especially, been a magnet for Indian students in the last few years with India being the largest source of international students in the country.

Stay tuned to www.studyabroad.careers360.com for more news and updates on engineering abroad