Courses with the best ROI in UK 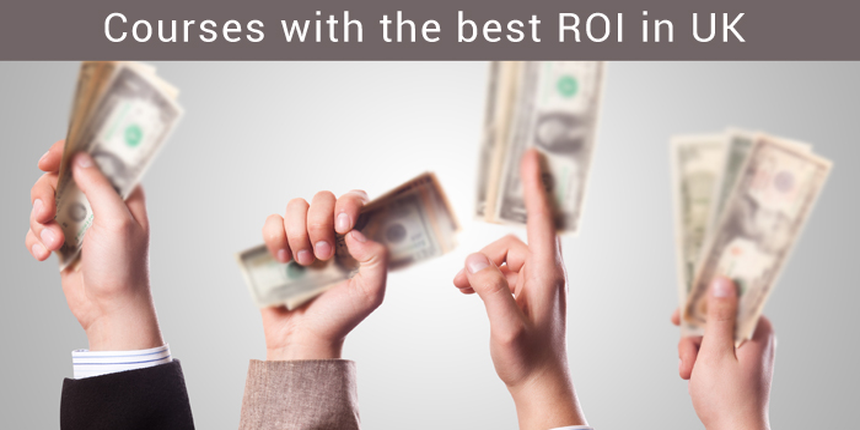 Courses with the best ROI in UK: Some of the major concerns among students while pursuing a bachelor or master’s degree abroad are whether the investment is commensurate with the benefits, how much time it will take before they start earning and whether the degree is a safe bet. These are genuine questions and need answers, because a normal degree from abroad costs upwards of $100,000 – including tuition and living expenses. Now when such kind of money is involved, it is better to be safe than sorry; in other words, getting a grip over the ROI of different courses is key to making informed choices.

MBA is considered to have one of the highest ROIs and so makes the list of courses with the best ROI in UK. But what are the other courses and what are the best places in the UK to study them? With more than half a dozen universities in the list of Top Universities in the World, the United Kingdom is a naturally a magnet for international students and it is only apt that students know what they are bargaining for. Here we bring you a list of courses with some of the highest ROIs along with top the universities and schools.

The charm of mathematics continues to endure with graduates drawing on average Â£39,015, putting them amongst the highest paid professionals in the UK. It is only the tip of the iceberg though, as statistics show salaries grow rapidly as one moves up the professional ladder. At senior levels, the salary may reach up to Â£70,000. Considering a Maths degree from a top university costs around Â£15,000-Â£25,000, the ROI is definitely a healthy one.

Moreover, the job prospects for a mathematician is only going to get rosier as according to a report published by the US Bureau of Labor Statistics, the job market will grow more than 20% by 2022. The growth will be fuelled by companies putting increasing emphasis on technology, big data and economic efficiency. All these will help the median salary to zoom past $100,000. Reason enough for mathematics to take its due place as one of the top courses with the best ROI in UK.

Mathematics has prospered due to its ability to evolve and branch out to such major disciplines like Applied Mathematics, as well as to accommodate and integrate with such diverse disciplines as Philosophy –Mathematics in Philosophy, offered by institutes like University of Oxford, being an example.

Career Scope: Being one of the top courses with the best ROI in UK, Maths graduates frequently find their calling as financial workers, accountants, bankers and statisticians, which absorb a major chunk of graduates. Other lucrative career options include jobs in the fields of Actuarial Science & Risk Management, Aerospace Engineering, IT and Computing and Biomathematics.

The second-oldest branch of engineering, Civil Engineering has held fort as one of most reliable professions in the world. According to a list of 10 courses with the best ROI in UK published by Business Insider, Civil Engineering with Â£44,851 ($70,131) is the course with the highest salaries. Now even if we accede to the fact that every ranking agency uses different metrics and criteria for their research, and consequently produces varying results, yet these ranking lists are a fair assessment of how things are in the practical world. These guys, who build bridges, dams, railroads, buildings and skyscrapers, for a living wouldn’t be complaining though while others who dream of following in their footsteps would feel encouraged.

A civil engineering degree in the UK costs an overseas student around Â£50,000-Â£75,000(tuition fees only), which going by the current salary, can be easily recouped in a couple of years. This is what makes civil engineering one of the top courses with the best ROI in UK.

The path to becoming a fully qualified architect might not be a bed of roses (the industry estimate is it takes around 7 years to become one), but once you wear the badge there is no looking back. With an average pay in the range of Â£40,788 ($63,778), and large vacancies looming in view of the building boom in London and other places, including the south, architects never had this good. Also, architecture is by no means the priciest degree on offer, which when seen in light of the salary on offer makes it a candidate for the courses with the best ROI in UK. Institutes like University College London have stellar placement records, and are good places to get a degree. Students here are also found moving away from high paying jobs to more satisfying and creatively inclined sectors like film-making, website design and furniture design.

Considering we live in a more and more tech-savvy world, it is only to be expected that a degree like computer science would find a lot of takers. Currently, computer geeks are raking in Â£41,950 and by the look of things they are expected to remain the top dogs for time to come. There are multiple factors that have helped computer science grow like increasing demand for people who can build websites or who can develop strong databases. UK is one of the best places to pursue a Computer Science degree given it has as many as four institutes in the top 50 Universities for Computer Science compiled by QS.

For those students who hold back from making a decision unless they are convinced that Computer Science is one of the courses with the best ROI in UK, the stats would help to make up their mind. They can cast aside the doubts, feel secure under the belief that a decent job awaits them and focus fully on their studies.

Career prospects: A computer science graduate wears many hats: database administrator, games developer, IT consultant, network engineer and systems developer. Most of the profiles ensure high packages for graduates making computer science one of the top courses with the best ROI in UK.

It doesn’t need you to be a rocket scientist to realise that an MBA degree pays well; otherwise, there wouldn’t be such a long queue of students waiting to get into a B-school. It is also a known fact that MBA degrees are one of the costliest around, but even that has failed to be a deterrent. According to an AMBA Careers Survey 2013, the mean salary of MBA graduates from AMBA accredited business schools touched as high as Â£82,000, almost monopolising the competition. Considering that an MBA degree from a top institute in the UK would cost anything between Â£100,000 and Â£200,000, it will roughly take, say, a London Business School graduate at maximum three to four years to cover the investment and start making profit, and thereby strengthening its claim as a permanent member of courses with the best ROI in UK.

According to a report by Financial Times, earning an MBA degree can help almost double one’s pre-MBA salary, another example of the value of an MBA degree and why it is considered to be among the pre-eminent courses with the best ROI in UK.

Career prospects: While the career path of an MBA graduate is as versatile as it gets, some of the popular career choices include roles in accounting, human resources, management, sales, product management, technology management and marketing.

Top universities to get an MBA degree (QS ranking):

One of the most respected and oldest professions, medicine is your passport to life-long security. Boosting one of the best employment guarantees and long-term prospects, medicine continues to be a career of choice for hundreds of students who are also drawn to it by its humanitarian values. Medical degree holders on average earn Â£28,525, which might not look very much, but considering that the medical profession hardly sees a slump in business, the steady flow of money isn’t going to be affected anytime soon(if ever). Also, even going by the current salary, medical students can erase the deficit pretty quickly, which is why medicine can’t be counted out of courses with the best ROI in UK.

Career Prospects: The normal career path includes work as a general practitioner and house surgeon. They may also go on to become clinical molecular geneticist or a health service manager.

Before choosing any of the courses with the best ROI in UK, students are advised to go through the admission process and check out entry requirements like English language proficiency tests (IELTS/TOEFL/PTE) and GRE scores, as it will make the process smooth and painless. Another important suggestion is to check the international scholarships offered by the colleges and universities and see if you would fit in. If you do fit in, it can make positive contributions to your ROI.

Stay tuned to www.studyabroad.careers360.com for more stories on UK