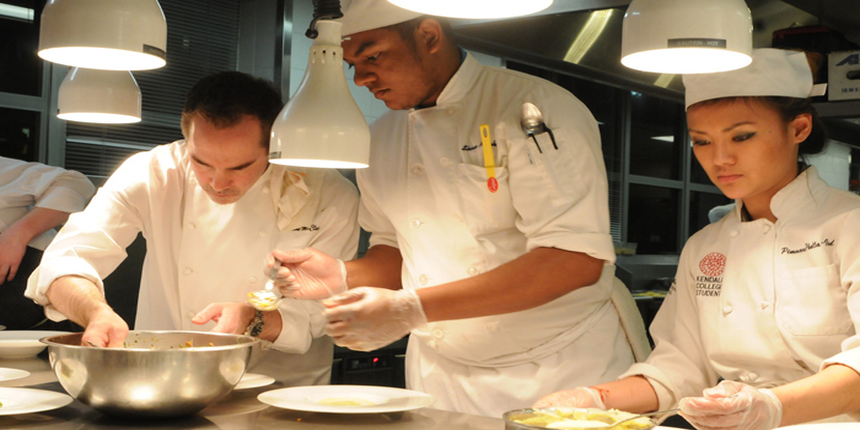 Around the world, professional chefs are celebrated today like they are famous movie stars. It wasn’t always this way. Indeed, the celebrity status of chefs in the United States, at least, is a relatively new phenomenon.

In the mid-1970s, a Chicago-based chef and restaurateur, Louis Szathmary, petitioned the U.S. Department of Labor to change the definition of “executive chef” in the Dictionary of Occupational Titles. Until then, a chef was officially considered a “domestic” in the same category as household workers.

Hungary-born Szathmary worked with two other individuals to successfully convince the Department of Labor to change its identification of executive chefs to “professional” and list them in the same category as medical doctors and lawyers.

Since then, cooking competitions and food show on television, food magazines and articles about food in newspapers and on the Internet, combined with growing interest in food and cooking among consumers, have helped elevate chefs to stardom.

For their celebrity status, American chefs owe even greater tribute to higher education. The cook of yesteryear did not need a college degree of any kind to secure a job in a professional kitchen. Training was accomplished either by formal apprenticeship or learned on the job.

Today’s situation is dramatically different. Because they are professionals, chefs and cooks need formal education not only in the culinary arts, but in general-education studies from math and science to world history and composition, as well as foreign languages, computer literacy and the humanities.

Careers in the culinary arts can be rewarding, but the pace is fast and the pressure is great. The restaurant industry is for people who like adventure and relish daily challenges.

To effectively train people for meaningful jobs in the U.S. restaurant industry, hundreds of accredited culinary-arts programs exist at the college level, and thousands at high schools. At Kendall College in Chicago, our intensive, hands-on, cutting-edge programs (which deliver training of just less than a year for a certificate to up to four years for an advanced degree) offer a unique combination of a rigorous culinary curriculum, business training and specialized advanced coursework.

We start with the fundamentals, and then incorporate advanced culinary techniques and skills. Students practice what they learn in real-world environments beyond the classroom, including the three Kendall restaurants and through internships. For nearly 30 years, we have helped graduates successfully launch their culinary careers by giving them the tools to be competitive job candidates and entrepreneurs.

We at Kendall College are witnessing an exciting field developing in research and development (R&D). The food-manufacturing industry requires educated, trained culinarians to develop and perfect products for consumers that are flavorful, easy to prepare and eat, and wholesome. R&D chefs must have a strong foundation in nutrition and human health.

Another newer opportunity for culinary graduates is the personal or private chef. Personal chefs are entrepreneurs who cook meals in the homes of their clients, store them safely, give instructions on reheating at meal time, and charge clients for personalized service. Personal chefs have become very popular with hectic families and individuals who do not have the time or knowledge to cook for themselves. Meanwhile, private chefs are employees who work for an individual (very often a celebrity), family or corporation (like a professional sports team or popular music band). They are paid a salary with benefits, and do not work for anyone else.

In just the last few years, the food-truck phenomenon has taken the United States by storm. Instead of building or buying a brick-and-mortar restaurant, a chef will purchase a vehicle large enough to be well equipped with modern cooking equipment. Food trucks can be driven to where large groups of people congregate at breakfast, lunch and dinner (usually in urban areas where many people work), offering freshly made, tasty dishes that are cooked, sold and served to customers directly from the truck. The food quality is often considerably better than that of fast-food restaurants, but is just as quick.

In fact, food trucks have become so successful in the United States that more and more chefs who own their restaurants are exploring the opportunity of operating a food truck as a marketing tool to increase their restaurant business.

Finally, one of the greatest needs for trained culinary professionals in recent years in the United States comes from the healthcare industry. Because the food one eats is so critical to one’s physical health and well-being, hospitals, acute-care centers, living centers for people age 60 and above, pediatric-care centers, shelters for the homeless and other health-providing institutions demand accomplished professional cooks and chefs to prepare the foods and dishes that people crave, made healthier and more nutritious.

Despite the economic slowdown that affected much of the world over the last several years, the need in the United States and other nations for skilled foodservice professionals continues to be great, while providing meaningful, fulfilling career opportunities for millions of people.

In fact, driven by a stronger economy and historically high levels of pent-up demand among consumers, U.S. restaurant-industry sales alone are expected to hit a record high of US$683.4 billion in 2014. Although this will represent the fifth consecutive year of real growth in restaurant sales, the gains remain below what would be expected during a normal post-recession period due to a range of challenges. The U.S. restaurant industry, however, will remain the nation’s second-largest private-sector employer, with a workforce of 13.5 million.

We at Kendall College have been meeting and will continue to meet the United States’ need for qualified, trained, responsible foodservice professionals. As one member of the Laureate International Universities network, with culinary-arts and hospitality training programs worldwide, we are excited to know that many other nations will also meet head on the challenge and opportunity to do the same.